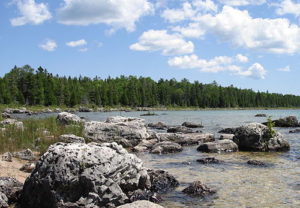 A leak in a more than half-century-old pipeline under a crucial junction in the Great Lakes could expose two-thirds of Lake Huron and more than 700 miles of Canadian and U.S. shoreline to contamination, a new analysis shows.

The Line 5 pipeline is part of the Enbridge system and crosses the Great Lakes at the Straits of Mackinac, between Michigan’s Upper Peninsula and the lower part of the state, where waters from lakes Michigan and Huron mingle. The single-wall pipeline carries up to 540,000 barrels a day of light crude, synthetic crude, and natural gas liquids. Enbridge has denied persistent rumours that it also plans to use the line to transport diluted tar sands/oil sands bitumen, the product that leaked for several days from another of its Michigan pipelines, crossing the Kalamazoo River, in 2010.

The study by University of Michigan’s David Schwab modeled three scales of oil leak from the aging pipeline and found that under some circumstances leaking oil could send a slick over nearly 60% of Lake Huron’s surface and 15% of Lake Michigan’s. Depending on weather conditions, shorelines at risk include the south coast of Ontario’s Manitoulin Island and west shore of the Tobermory Peninsula. For the largest modeled spill, of 25,000 barrels of light crude, Schwab estimated that some 240 kilometers of lakeshore would require active clean-up.