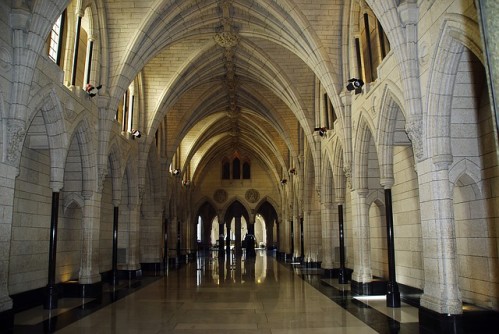 “I mean, really, it was an insult,” Kant told the legislative body formerly known as the House of Commons. “They were only willing to invest 36 bills. They only offered to produce about 12 megatonnes per year of emissions, when we know our forest industry needs more CO2 in the atmosphere. And they turned down our excellent suggestion that they also build an executive fishing resort on the island, even after we offered them a 100% tax break for as long as the river flows and the salmon run.

“Sure, the salmon part was a limited-time offer,” the Minister said. “But you call that a partnership?”

The thunderous applause from Cabinet was reinforced by loud barks and slapping of flippers from the government backbench and silence from the wrong side of the House, after the House Speaker summarily dismissed Opposition MPs’ pleas to have their manacles loosened and leg irons removed for Question Period.

The Petronas rejection was a badly-needed win for Harper, who had used his emergency powers under the War Measures Act to cancel mid-autumn elections and declare a state of apprehended insurrection suspended animation after the U.S. president refused permission for TransCanada Corporation’s proposed Keystone XL pipeline.

“I told you I wouldn’t take no for an answer,” Harper said at the time. “I want my pipeline, and my pipeline is what I shall have. To quote another great prime minister from years past, ‘just watch me.’”

Reality show host Kanye O’Leary had previously sought to Trump that move by changing the channel and declaring the Petronas deal a pathetic half-measure.

“I’d have made a much better deal!” the faux-dragon roared. “Offer a package, Lelu Island and the whole city of Vancouver. I know people in China, they’ll pay so much we can retire the whole national debt!”

“When we win, this case won’t just retire the national debt. It will completely retire the notion of public recourse against eminent domain,” Flyaway said. “The message to our courageous pipeline industry is simple: If you want it, you can have it.”

This morning, as well, Kant said The One Government had received its landmark thousandth call reporting Canadian environmental groups to its Barbaric Cultural Practices Hotline.

“Those Vancouver latte liberals may not be very cultural, but they sure are barbaric,” the Minister said. “We know that tar sands/oil sands development is about ‘jobs, jobs, jobs’. That may be exactly three jobs right now. But that’s why we were looking to Petronas to ‘ratchet up their ambition’, as those horrible green-types like to say.”