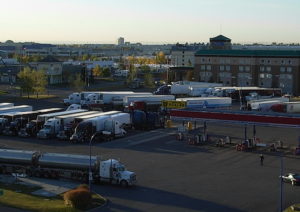 Even as automakers expand their lineups of electric passenger vehicles, bigger changes are coming sooner to heavy-duty trucking, commercial vehicles, and even some marine engines, Yale 360 reports.

Transportation emissions remain a challenge for limiting the rise in global greenhouse gas concentrations, with tailpipe exhausts forecast to double by mid-century as the number of fossil-fueled vehicles in developing countries balloons. “But while the adoption of electric cars has been hindered by high prices, limited range, a lack of charging stations, and competition from cheap gasoline,” Yale notes, “heavier-duty models are undergoing rapid innovation for battery-powered city buses, delivery trucks, freight loaders, and ferries.”

One advantage of electrifying commercial fleets is that such vehicles often make predictable, regular trips within limited urban settings, returning nightly to a compound where charging facilities can be centralized. Moreover, the technology of heavy-duty electric motors is also advancing, writes Yale 360’s Cheryl Katz, to the point that “large, battery-powered city buses can now travel their entire daily route (generally up to around 150 miles) on a single charge.”

China has around 80,000 electric buses on the road, and analysts at IDTechEx project that global electric bus sales will top 250,000 by 2025. The port of Los Angeles is introducing hybrid electric tugboats, and all-electric ferries now ply certain Norwegian fjords.

According to Christopher Knittel, director of the Center for Energy and Environmental Policy Research at the Massachusetts Institute of Technology, electrifying commercial and municipal fleets could reduce global transportation emissions by 25 to 50% by mid-century.

Gas-fueled passenger vehicles represent a much larger quantity of emissions. The governments of Canada, Ontario, and Quebec have all announced initiatives in the last six months to encourage adoption of electric cars.