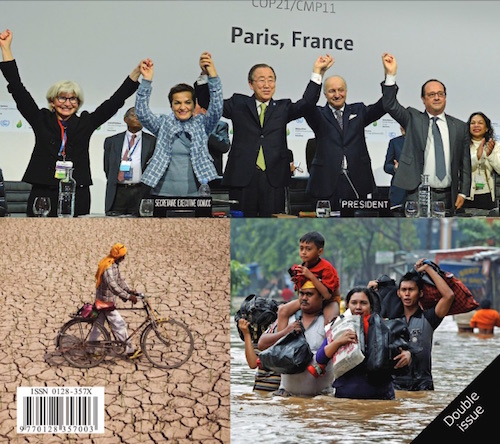 Developing countries should refuse to sign the Paris climate agreement until they receive stronger assurances on finance, technology and compensation for damage from extreme weather.

That’s the key recommendation in a five-page briefing from an influential Malaysia-based think tank sent to members of the Arab Group of nations last week.

“It will be more advantageous to developing countries to wait this year and not rush into signing of the PA [Paris Agreement],” says the note, written by Meena Raman from Third World Network.

“Otherwise, as indicated above, we lose the political leverage that is critical to secure the necessary conditions that will enable developing countries to meet their obligations.”

Third World Network: reasons to wait
-Secure the leverage needed in the negotiations
-Ensure the fulfilment by developed countries of existing commitments
-Wait for roadmap on the provision of the $100 billion annually in climate finance by 2020
-Assess progress on new ‘loss and damage’ mechanism
-Assess effectiveness of technology transfer efforts

The intervention comes at a critical moment in efforts to build on last December’s deal, agreed by all 195 countries that take part in UN climate talks.

UN secretary general Ban Ki-moon has invited world leaders to show their support for the historic pact to limit global warming to safe levels at a signing ceremony in New York on 22 April.

Countries need to ratify the deal before it becomes legally binding, but under the Vienna Convention on the Law of Treaties a signature indicates support for its principles.

Interview: How ratification works according to the UN’s top treaty lawyer

On Tuesday a French government official told Climate Home over 100 countries have indicated they will travel to UN headquarters, the first major climate event since Paris.

The agreement could come into force this year if 55 countries covering 55% of global greenhouse gas emissions win formal approval from national lawmakers.

Speaking to Climate Home from Malaysia, Raman said poorer countries would be wise to hold out because promises of support from the industrialised world “have not been fulfilled”.

Analysis from the Carbon Brief website suggests developing countries will need $3.5 trillion of investment by 2030 to deliver on climate plans submitted to the UN last year.

While rich nations are not expected to foot all of the bill, levels of north-south flows of finance are fiercely contested, with estimates for 2014 ranging from $10-62 billion.

Raman pointed to the teething troubles of the $10.3 billion Green Climate Fund, which has disbursed $168 million after officially launching last year.

“You have to make sure everything is in place. It’s not about rushing. It’s more important to ensure that once you sign you can implement it,” she added.

The document’s metadata indicates Ashraf Shalaby, an Egyptian official who acts as a liaison between Arab nations at UN climate talks, helped write the proposal.

The oil and gas-rich region has long held out against a global pact to restrain fossil fuel use, only backing down in Paris after diplomatic pressure from the US, EU, China and small island states.

But three advisors to small island states and least developed countries told Climate Home they did not believe a mass boycott of the 22 April event is likely.

“The idea of preserving leverage when the world is at a tipping point is baffling and not really getting traction,” said Farhana Yamin, a lawyer who advises the Marshall Islands at the climate talks.

“Trying to stoke up anger at the loss and damage [climate compensation/liability] Paris provisions is equally mystifying as Article 8 talks about enhancing both action and support,” she added.

And speaking off the record, an advisor to African nations said a move to slow the ratification process could see developing countries excluded from talks on implementing the new deal.

“Ratification and early entry into force will keep the momentum going and push for countries to be more serious about their climate action.”