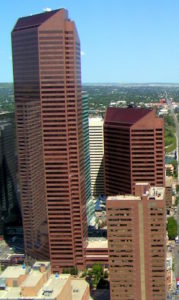 Suncor Energy Inc., Canada’s largest tar sands/oil sands producer, is hedging its bets, expanding its position in its original business while exploring a much larger foothold in renewable energy with significant investments in Alberta wind and solar.

The company is at the “preliminary development stage” with three solar and four wind projects in Alberta, the National Observer reports. Sites east of Drumheller, near Medicine Hat, and in the Cypress County area would add 240 megawatts of solar generation if they all come online by the tentative target date of March, 2018.

Suncor, which already has six wind farms generating 287 megawatts in Alberta, would more than double that inventory if it develops the four new installations under consideration, with additional capacity of 440 megawatts.

Last year, Suncor CEO Steve Williams rallied business leaders to tackle climate change. “Climate change is happening,” he said in a speech. “Doing nothing is not an option we can choose.”

At the same time, Canadian Oil Sands Ltd. disappeared from stock listings last week as Suncor completed its purchase of the rival company for $4.9 billion. The main effect of the purchase was to increase Suncor’s holding of Syncrude Canada, an iconic tar sands/oil sands bitumen producer, from 12 to 49%.

The purchase vaults Suncor past the next-largest shareholder in Syncrude, Imperial Oil Ltd. and its parent ExxonMobil Corp., which currently hold the facility’s operating contract. Steve Reynish, Suncor’s executive vice-president of strategy, said his company would work more closely with the existing management “to do more on creating value, cutting costs, and looking at synergies in the region.”