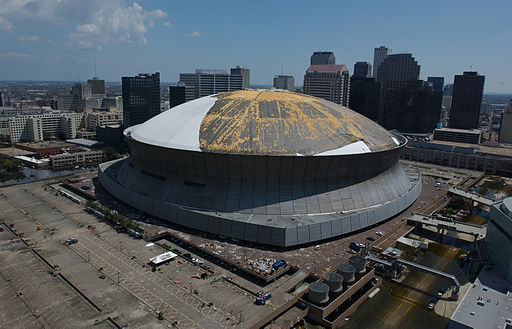 The Louisiana Superdome, a potent symbol of climate consequences when it sheltered 30,000 refugees from Hurricane Katrina in 2005, was again a symbolic setting as environmental advocates tried to interrupt a U.S. federal auction of Gulf of Mexico oil and gas leases being held inside the building last week.

Federal regulators planned to auction off drilling rights to 17.5 million hectares of sea floor in the central and eastern Gulf of Mexico, estimated to contain the eighth-largest fossil energy reserves on Earth, Grist reports. The fields being auctioned run from three to 215 miles (five to 350 kilometres) offshore, in waters up more than 11,000 feet (3.35 kilometres) deep.

About 100 people representing several national environmental groups, including the Rainforest Action Network, 350.org, and Indigenous rights groups, rallied outside the Superdome to protest the auction.

“We want the administration to stop treating the Gulf like an energy sacrifice zone,” Friends of the Earth climate campaigner Marissa Knodel told Grist. “Louisiana is already seeing the devastating impacts from a changing climate, with [community] relocation efforts already under way.”

E&E News [subscription] reported later that some demonstrators entered the Superdome in an attempt to interrupt the auction, but it had already concluded. Thirty companies spent US$156 million to acquire rights to explore for oil and gas in nearly 700,000 acres (283,000 hectares) of the Gulf of Mexico.