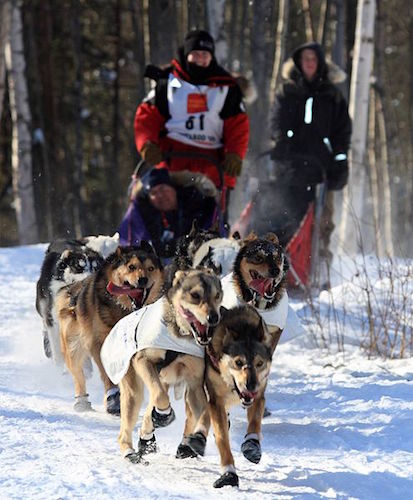 The Iditarod dog sled race, possible the world’s most iconic sporting event of human endurance in the face of winter, is suffering from an absence of winter. Even after organizers imported 11 rail cars of snow, contestants this year complained about its shortage on the trails.

The 43rd running of the roughly 1,000-mile (1,600-kilometre) race by dog sled across Alaska’s tundra—recreating an historic journey to deliver medicine to Nome—produced some record fast times, but also bone-jarring dangers that raised questions for the Iditarod’s future, the Guardian reports.

“There was just no snow. We were running on ice and dirt,” musher Marie Helwig said. “You can’t really control a sled when there is no snow.” Dogs lost their footing on frozen trails and barren tundra and risked overheating on warm, sunny afternoons. On one stretch of the route, the paper reports, “dog teams were forced to change course away from the Yukon River, avoiding dark cracks which had opened in the ice.”

“If your question is, ‘What are the odds of getting this warm a winter without climate change?’” said John Walsh, chief scientist at the International Arctic Research Centre in Fairbanks, “I would wager that it would be zero.”

Some contestants are now calling for the race to be moved earlier in the year, to improve the odds it can still be held under winter conditions.