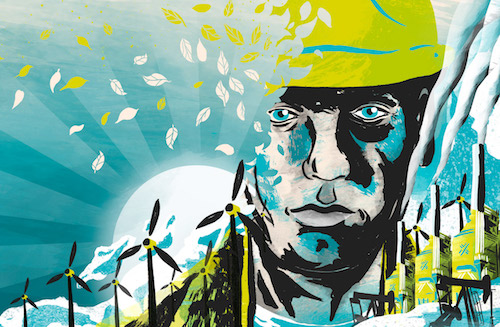 Unemployed tar sands/oil sands workers in Edmonton have formed a non-profit and launched a petition to advocate for the retraining that would prepare them and their colleagues to enter the clean energy economy.

“We have the skills to build the renewable energy infrastructure required for Canada to meet their climate target,” said Iron and Earth Executive Director Lliam Hildebrand. “That will open up a huge amount of opportunity for us if we can start diversifying our energy grid, and it would ensure that we are less vulnerable to price fluctuations.”

The group is asking the Alberta government and private sponsors to commit to solar installations on 100 public buildings. “They are also asking the government to retrain 1,000 oil and gas electricians as solar electricians in order to do that work over the next three years,” CBC reports.

Environment Minister Shannon Phillips told CBC she had asked her department to meet with Iron and Earth. “We know that as we transition from coal to cleaner sources of power, there will be new job opportunities in a more diversified energy economy,” she said.

Hildebrand told The Tyee he’d always had a passion for the environment, but went to work in the tar sands/oil sands because renewable energy jobs were hard to find. “When I entered the trade, I didn’t have any understanding of climate change and the impact my trade is having on the world,” he said. “But that awareness has been growing within me and our society.”

Hildebrand’s co-director, third-generation boilermaker Joseph Bascu called the organization a “beautiful mess,” adding that Hildebrand initially had to persuade him to get involved. “I’m a carbon-based guy. I’m not an activist. I’m not, ‘green this, green that.’ Oil has obviously given me the lifestyle I live today.”

But he called Iron and Earth a “much-needed positive move forward in a national conversation long polarized by protests and denial, but now moving forward with real green energy efforts,” writes The Tyee’s Mychaylo Prystupa.