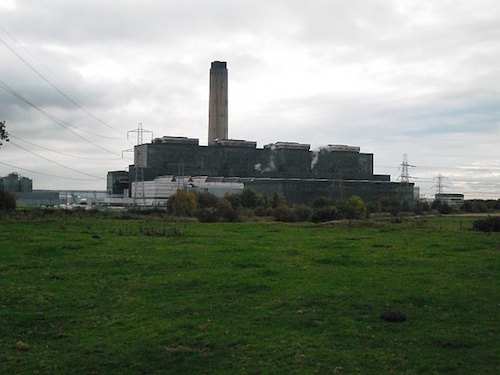 “Ok, here we go,” said a worker at Scotland’s Longannet power station Thursday, moments before pressing a bright red button to shut down the last and largest of the country’s coal-fired generation facilities.

The plant had been in operation for 46 years, and Scotland’s run with coal had lasted 115. Longannet produced enough electricity to power 25% of Scottish homes.

“Longannet’s closure comes as Scotland, a country of some five million people, aims to have enough renewable energy to power 100% of its electricity demand by 2020,” ThinkProgress reports. “Renewable electricity output has more than doubled since 2007 and is equivalent to half of the electricity consumed. This surge in renewables follows a massive investment in onshore and offshore wind, which has established Scotland as a renewable energy leader in the region,” with the United Kingdom’s biggest offshore wind farm operating near Glasgow.

“For a country which virtually invented the Industrial Revolution, this is a hugely significant step, marking the end of coal and the beginning of the end for fossil fuels in Scotland,” said Friends of the Earth Scotland Director Richard Dixon. The Longannet plant burned about 4.5 megatonnes of coal per year and accounted for 20% of the country’s greenhouse gas emissions.