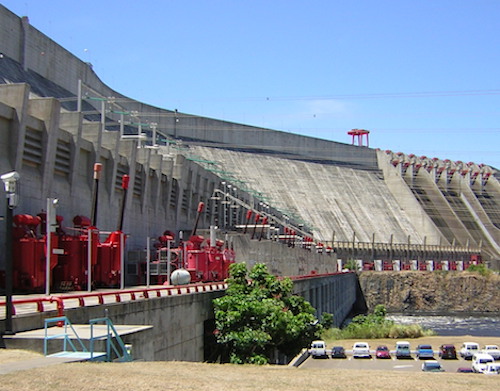 Just four metres of water depth behind Venezuela’s Guri Dam stand between the troubled, oil-rich country and the “collapse” of its power grid, prompting the government to declare extra days of forced Easter vacation to reduce demand.

In normal times, the Guri Dam reservoir in eastern Venezuela is the country’s largest body of fresh water. The dam’s 10-GW powerhouse complex provides 65% of Venezuela’s electricity, according to the Latin American Herald Tribune. But a prolonged drought has reduced water levels in the vast reservoir—considered the eleventh-largest human-made lake in the world—to just four metres above a point at which water will no longer reach its turbines.

Last year, Brazil reported that the worst regional drought since record-keeping began in the 1930s similarly threatened to reduce several of its hydroelectric reservoirs to near zero capacity.

Electricity has been rationed and subject to rolling blackouts in Venezuela for months; hours at malls and public offices have been curtailed. Finally, last week, President Nicolas Maduro gave everyone in the country an extra three days off work in a week already cut short by the two-day Easter holiday.

“We shouldn’t be at this crisis stage,” veteran grid engineer Miguel Lara told the Tribune. “It is not Guri that is in disarray, it is the whole system. The Guri complex was designed to provide 60% of all the power, and the rest was meant to come from thermal sources.”

“Venezuela had the money to make this work,” Lara said, “they were just careless with the installed capacity.” Instead of balancing Guri with other generation capacity, with “[electricity] rates frozen, companies nationalized, capacity that was supposed to be installed was never installed and maintenance not carried out. Now, we are even more dependent on hydro than ever before.”

Venezuela’s rainy season has begun, but observers say water levels behind the dam continue to fall. “I will not say that the system will collapse,” Lara said, “but we are certainly operating in a dangerous area.”

While the country’s energy minister conceded that the Guri dam had reached critical levels, he insisted the national grid was not on the verge of collapse.