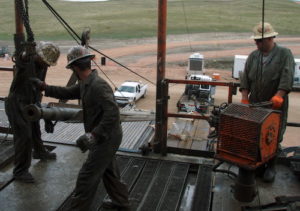 Chalk it up to a healthy dose of caution, or a growing sense of a new reality.

But while multi-billion-dollar infrastructure investments caught the headlines after Canadian Finance Minister Bill Morneau tabled his first budget Tuesday afternoon, the 271-page document contained some sobering analysis for the fossil industry, as well as short-term relief for laid-off oil and gas workers.

“The magnitude of the shock facing the Canadian economy is substantial,” the budget states. “Commodity prices began to decline in mid-2014. Oil prices have now dropped by about 65% and are expected to recover only slowly in the coming years.”

With fossil analysts musing hopefully about a slow but steady recovery in oil prices, a chart early on in the budget document shows benchmark West Texas Intermediate crude leveling off at US$50 per barrel through January 2021. That’s well above its January 2016 low in the range of $30 per barrel, but still well short of a price that would signal a recovery in Canada’s fossil industry.

And just a year ahead of the moment when Bloomberg New Energy Finance believes the falling cost of owning an electric car will begin to undercut fossil-fueled vehicles, triggering the next oil price shock.

The day before the budget release, CBC reported on a leaked Finance Department document that expresses concern about the prospects for future tar sands/oil sands expansion, and the implications for Canada’s economy.

“Several new projects are under construction in Northern Alberta that will be completed in the next several years and increase oil production. However, after 2020, there is uncertainty about new investment,” wrote Calgary-based business reporter Kyle Bakx.

“What we are talking about is a continued transformation,” said Warren Mabee, director of the Queen’s Institute for Energy and Environmental Policy. “The thing that really stuck out for me is that none of the pathways that they describe really defines a future where you are really going to see a lot of additional development in the oilsands sector.”

Mabee added that “we are going to need other parts of the economy to really start picking up the slack,” and the budget suggests that transformation has already begun.

But the budget acknowledges that the oil price crash has cost Canada $150 billion in GDP, a 30 to 40% drop in fossil investment (representing another $30-billion GDP hit), and 65,000 jobs lost in Alberta since October 2014. With that in mind, the document commits to extended employment insurance benefits in 12 hard-hit economic regions, including Calgary, northern and southern Alberta, northern British Columbia, northern Saskatchewan, and Newfoundland/Labrador.