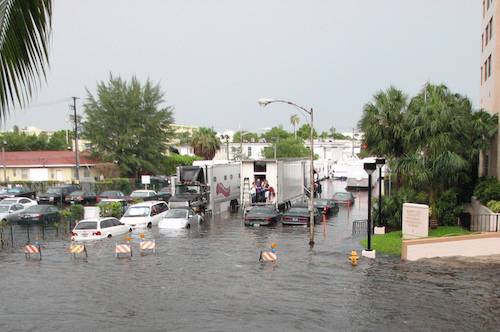 Rising oceans could displace more than 13 million people in the United States by 2100, and relocating them could cost US$14 trillion, according to a study last week in the journal Nature Climate Change that was considered novel in the way it combined projections for population growth and sea level rise.

“Projections are up to three times larger than current estimates, which significantly underestimate the effect of sea level rise in the United States,” said co-author Mathew E. Hauer of the University of Georgia. “There are 31 counties where more than 100,000 residents could be affected by six feet of sea-level rise.”

The study found that six million people in Florida and one million each in California and Louisiana could be displaced.

“Millions of people may need to relocate, with the expected migration similar to that of the 20th-century Great Migration of southern African-Americans to the North,” USA Today reports.

Bloomberg’s report on the Nature study focuses on vulnerable Tyrrell, Hyde, and Dare counties in North Carolina, where research by anthropologist Christine Avenarius “revealed a kind of schism within people who see that some kind of change is happening, but tend not to talk about it as scientists do,” writes correspondent Eric Roston.

“Residents in tourist-magnet Dare County talk mostly about erosion as the force reshaping the coastline; only 7% of the 210 Dare residents interviewed describe the change as ‘sea level rise,’ which is currently proceeding at a rate of 1.5 feet per century, and accelerating, according to a gauge in the town of Duck.”

Duck town manager Chris Layton “knows that the pace of change, while high, can at least be projected relatively smoothly into the future,” Roston notes. “Policies can be written and rewritten. A bigger concern is storm damage, he said, which won’t follow a predictable trend line, and is therefore harder to prepare for.”