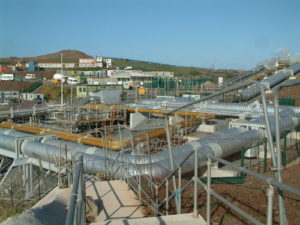 Petronas’ highly controversial Pacific NorthWest liquefied natural gas (LNG) proposal in British Columbia will be subject to full review by the federal cabinet, scarcely a week after the company’s CEO threatened to cancel the project if approvals extended beyond March 31.

“Environment and Climate Change Minister Catherine McKenna will refer a verdict to Prime Minister Justin Trudeau’s cabinet rather than approving the C$36 billion (US$27 billion) project with conditions,” Bloomberg reports, citing federal officials. “The government’s review period ends March 22, but the cabinet has no deadline for its deliberations.”

Bloomberg’s Josh Wingrove and Rebecca Penty describe the decision as “among the first tests of the Trudeau government’s handling of energy and climate issues,” after McKenna and Natural Resources Minister Jim Carr introduced a new climate test and consultation process for major resource projects in late January. “Liquefied natural gas proponents in Canada were already playing catch-up with global competitors before the oil market collapse brought down LNG prices and caused companies to crimp spending on megaprojects.”

After CEO Zulkiflee bin Wan Ariffin threatened to abandon Pacific NorthWest, a Petronas spokesperson walked back the statement, affirming that the company “remains committed to the environmental process, including the new measures on upstream greenhouse gas emissions,” Reuters reported last week. This Tuesday, Pacific NorthWest President Michael Culbert repeated that “we are encouraging a timely decision but have not given the government any kind of ultimatum.”

But John Stephenson, founder and CEO of Toronto investment firm Stephenson & Co., said Petronas could still walk away from the project if the cabinet imposes new conditions.

“This is going to be widely watched as a barometer on the government’s interest in supporting what is the driver of the Canadian economy, which is energy,” Stephenson told Bloomberg. “Any hiccup from the government’s side, I could see these guys walking.”

On Pacific NorthWest, however, “McKenna is essentially following the advice of the Canadian Environmental Assessment Agency (CEAA), which said in a report last month that the project would have a significant environmental impact because of its carbon emissions,” Wingrove and Penty write.

In a March 14 letter to the CEAA, Pembina Institute Associate Director Matt Horne said Pacific NorthWest could become Canada’s biggest carbon polluter if it were ever built, making it impossible for British Columbia to meet its legislated climate target. “No matter how you spin it, the Pacific NorthWest LNG project will not help reduce global carbon pollution,” he said. “Stronger climate policies—not increased fossil fuel production—are the climate solution.”

Pembina notes that Pacific NorthWest and its upstream operations would produce the equivalent of 11.5 to 14.0 megatonnes of carbon dioxide per year, accounting for 75% to 87% of B.C.’s target emissions for 2050. “Methane emissions, which are likely underestimated in the draft environmental assessment of the project, would make the situation worse,” the organization states.

“Contrary to claims by the B.C. government and project proponents, the increased availability of LNG and natural gas is not a climate solution because the policies in B.C. and importing jurisdictions to prioritize renewable energy, energy efficiency, and methane reductions are inadequate.”

National Observer analyst Barry Saxifrage compares Pacific NorthWest’s projected greenhouse gas emissions with the 1.8 Mt per year the province has saved so far through carbon taxes and carbon reduction programs, noting that the LNG project “could wipe out all this work more than six times over.

So “if Mr. Trudeau approves Pacific NW LNG he might find himself having to explain to frustrated British Columbians why they should continue sacrificing to cut emissions when all their past efforts just got wiped out several times over by his approval of this one new project,” he writes.