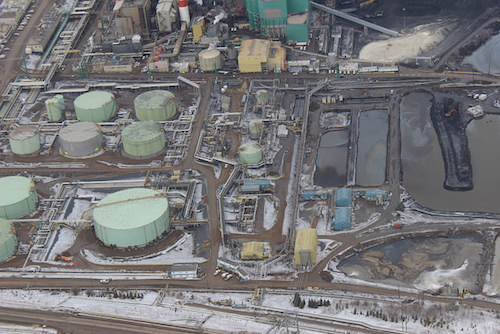 Canada’s efforts to control greenhouse gases tend to exempt industries that deliver the least economic gain per tonne of emissions, a feature that could undo the gains the rest of the country makes on climate change, analyst Barry Saxifrage reported earlier this month in the National Observer.

To expand the national economy while reaching their climate goals, “Canadians need to average around $4,000 in GDP per tonne” of carbon dioxide emitted, Saxifrage reports, nearly twice the current “average of $2,200 in GDP from each tonne of CO2.”

Pulling down that average are “Emissions Intensive, Trade Exposed” (EITE) industries such as bitumen extraction from tar sands/oil sands deposits. Every province has some EITE industries, and they’re mostly exempt from carbon-emission caps (although last week in Washington, Canada and the U.S. agreed to jointly reduce fugitive methane emissions from oil and gas production by 40-45% by 2030.) But they are largely concentrated in Saskatchewan and Alberta.

“These EITE sectors emit 13 times more climate pollution to produce each dollar of GDP” compared to cleaner sectors, Saxifrage writes. “By 2030, their extremely low-GDP emissions will take more than half our nation’s carbon budget to produce less than $2,000 per Canadian (at their current emissions efficiencies).”

For the moment “Quebec, Ontario, and B.C. are within striking distance” of emission reductions consistent with the national target, Saxifrage writes. But two of those provinces anticipate substantial increases from EITE sectors.

British Columbia’s “proposed 2030 climate policies specifically shield EITE emissions” from planned mining and gas developments, he notes, while Ontario’s climate plans waive emission controls for EITE industries that produce just 2% of its GDP. And Alberta, home to half of Canada’s EITE emissions, anticipates that they will rise to 2030 at a rate that would “single-handedly fill up half our climate budget with very low-GDP emissions.”

The good news, Saxifrage writes, is that 95% of Canada’s economy could easily reach the goal of $4,000 in GDP per tonne of CO2 that would deliver on the country’s climate goals while contributing to national prosperity.