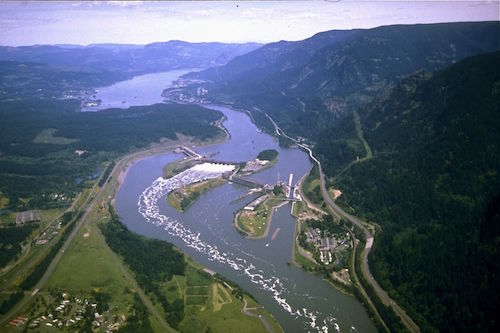 The Canadian government has confirmed it is ready to renegotiate the 52-year-old treaty that governs the Columbia River, source of 44% of the United States’ hydroelectric generation and half of British Columbia’s, in the wake of Prime Minister Justin Trudeau’s visit to Washington, DC last week.

“We have now committed to appointing a negotiating team for comprehensive talks with our United States partner to modernize the Columbia River Treaty,” wrote Global Affairs Canada spokesperson Joseph Pickerill, in an email to The Energy Mix assistant curator Chris Wood.

Complaining that U.S. efforts to negotiate changes to the treaty terms have been rebuffed by Canada and B.C. for years, Senator Maria Cantwell (D-WA) seized the moment to press Prime Minister Justin Trudeau on the issue during his visit to the U.S. Capitol.

“The Canadian leaders agreed to move forward and appoint a chief negotiator to begin treaty talks,” she wrote, in a statement released by her staff. ““Given the United States and Canada are among the largest hydroelectric energy producers in the world, there is significant, untapped potential to generate new jobs and drive economic growth on both sides of the border.”

A modernized treaty “could allow the two nations to work jointly on energy solutions such as a smart electric grid with intermittent power, grid-scale storage, and clean infrastructure solutions,” the Tri-City Herald added, citing the Cantwell letter.

The border-straddling Columbia River is the second-largest by volume in the United States, after the Mississippi, and Canada’s third-largest. A treaty signed in 1964 allows for joint management of three dams on Canadian stretches of the river, and one on the U.S. side, to control downstream flooding and optimize power generation. Dams along the Columbia have a combined generating capacity of 29 gigawatts, according to the U.S. Energy Information Agency.

The treaty brings British Columbia $100 million to $300 million per year in payments for the increased value of electricity generated by dams on the U.S. side of the river—including the immense, 6,620-megawatt Grand Coulie Dam—that benefit from the management of river flows on the Canadian side of the border. Those benefits are now on the table in the anticipated negotiations.

The treaty has no expiry date, but can be amended or ended on ten years’ notice, anytime after 2024. U.S. interests have been pressing Canada for more than two years to discuss changes in the way the Columbia is managed under the treaty.

Canadian environmentalists and water experts have also been calling on the B.C. government to develop a plan to update the treaty to reflect changing priorities on the environment, First Nations rights, and climate change.