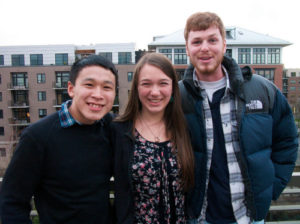 The setting felt more like a field trip than a federal court last week when 21 plaintiffs, aged eight to 19, and two busloads of junior high school supporters showed up at the U.S. District Courthouse in Eugene, Oregon for a climate change complaint brought by Our Children’s Trust.

“By failing to act on climate change, they argue, the United States government—including President Obama and a baker’s dozen federal agencies—has valued its own generation more than future generations, which will bear a greater burden with respect to the climate crisis,” Grist reports. “The Justice Department filed a motion to dismiss the complaint, and Wednesday’s hearing had a federal judge considering that motion. The youth plaintiffs’ counsel sparred with government lawyers, as well as attorneys representing fossil fuel interests.”

While “this kind of case might sound, well, juvenile,” Grist notes, it drew the attention of heavy hitters like the American Petroleum Institute, the American Fuel and Petrochemical Manufacturers, and the National Association of Manufacturers, all of which joined the U.S. government as co-defendants in mid-November.

The complaint is built on the English common law doctrine of public trust, which calls on governments to protect certain natural resources and systems on behalf of current and future generations. “An important question at hand on Wednesday was whether the public trust doctrine applies to the federal government,” writes correspondent Clayton Aldern. “The U.S. government and its fossil fuel industry co-defendants argued that legal precedent only considers it to apply to states. That’s a crucial distinction, because it will help determine whether or not the plaintiffs even have standing in the federal court system.”