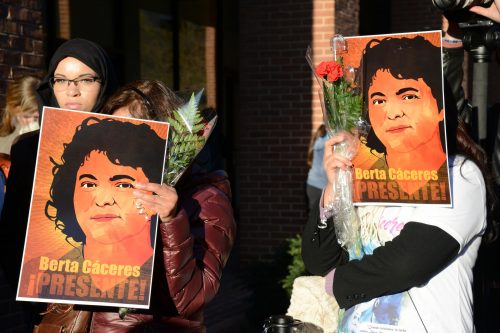 A wave of international outrage and protests was triggered last week after Honduran Indigenous and environmental rights campaigner Berta Cáceres was shot dead in her home, just a week after receiving threats over her opposition to the Agua Zarca hydro project, one of the biggest in Central America.

Cáceres, a member of the Lenca Indigenous group and co-founder of the Council of Indigenous Peoples of Honduras (Copinh), received the prestigious Goldman Environmental Prize in 2015. She was murdered around 1:00 AM last Thursday by intruders who also wounded Mexican activist Gustavo Castro Soto, in what police described as an attempted robbery.

“I have no doubt that she has been killed because of her struggle, and that soldiers and people from the dam are responsible,” her 84-year-old mother told media. “I hold the government responsible.”

Copinh’s campaign had successfully held up the project despite repeat threats along the way, and The Guardian reports that “the dangers appear to have increased in recent weeks.” Between 2010 and 2014, 101 campaigners were killed in Honduras, according to NGO Global Witness.

“This shows the high level of impunity in Honduras,” said Victoria Tauli-Corpuz, the United Nations Special Rapporteur for Indigenous Rights, who met Cáceres last November. “Beyond the high homicide levels in society, there is a clear tendency for Indigenous campaigners and human rights activists to be killed.”

Around the time she received the Goldman award, Cáceres told The Guardian she was realistic about the risks she faced.

“We must undertake the struggle in all parts of the world, wherever we may be, because we have no other spare or replacement planet,” she said. “We have only this one, and we have to take action.”