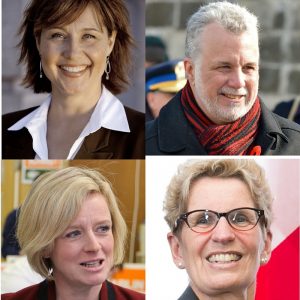 Last week’s First Ministers’ meeting on climate change came in for its share of criticism from national media and some climate advocates, all pointing to the lack of a firm national plan or a final decision on carbon pricing.

But it may turn out that the closer you are to the developing climate policy process, the more satisfied you are with the interim results, Alberta climate hawk Chris Turner writes on The Walrus.

The “Ottawa commentariat’s usual suspects” were quick to declare the meeting an abject failure, he writes. But “if you need a rough measure of the neglect the Ottawa press has generally given to climate policy, you could use the comparative reactions of Parliamentary Press Gallery regulars, hard core climate wonks, and sustainable business types in the audience” at the GLOBE environmental business conference, just a few hundred metres from where the First Ministers met.

On the climate wonk side of that coin, “the reaction to the supposed policy failure represented by the fact that the carbon pricing regime promised by the Liberals in their campaign would not be delivered in full for another six months was a collective shrug,” he notes. “This is not to say the folks at GLOBE don’t care about carbon pricing, but rather compared to the state of the national discussion about carbon pricing until very recently, so much ground had already been covered that it didn’t matter so very much that the final details would require a bit more politicking.”

In an earlier post on iPolitics, Clean Energy Canada Senior Policy Advisor Clare Demerse argues that the First Ministers meeting was a sign of progress. “No doubt about it: Tough conversations are coming, especially about the best way to price carbon pollution,” she writes. But there are four reasons for optimism: The commitment to a national climate plan is unprecedented, the right players are involved, the discussion among First Ministers focused on the economy as well as the environment, and the process “can deliver a plan to build Canada’s clean energy economy.”

Traditional climate negotiations are traditionally a “fight about the allocation of pain,” she writes, but “there’s now a huge opportunity to talk about. Instead of arguing about what we’re going to cut, it’s time to figure out what we’re going to build.” The First Ministers’ declaration acknowledged that “this means building far more clean power, along with a smarter grid and a new generation of cars, buildings, and industrial processes. And there’s money to be made every step of the way.”