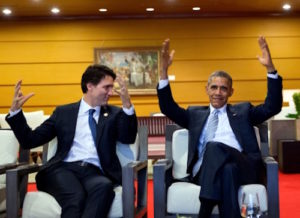 Joint efforts to protect sensitive marine areas and shift remote communities from diesel generation to wind and solar will be high on the priority list when Prime Minister Justin Trudeau and President Barack Obama meet at the White House this Thursday.

The measures are part of a broad plan to address climate change in the Arctic, the region of the world that has seen the fastest warming to date.

“The Arctic is important to us and I know it is important to Canada,” U.S. Ambassador Bruce Heyman told the Globe and Mail. “Climate change is a priority to the President and I just know these are serious and important issues, but I don’t want to get ahead of what may be announced or not announced on a bilateral basis.”

“Coming from Nunavut, we’re experiencing first-hand the effects of climate change already, and it’s going to affect us in the Arctic places fast, as it does here in southern Canada,” added Canadian Fisheries Minister Hunter Tootoo, Member of Parliament for Nunavut, who will accompany Trudeau to the meetings and to a rare state dinner in the PM’s honour Thursday night.

“Arctic ice has been melting at an alarming rate, resulting in disappearing glaciers, rising sea levels, and eroding coastlines that are endangering Indigenous villages,” Fife writes. “The environmental damage has been compounded by ‘black carbon,’ the soot produced from diesel-burning electrical generators.”

NRDC’s Frank Matzner expressed support for joint action, while also calling for an Arctic drilling moratorium that officials said is unlikely. “Drilling is all risk and no reward,” Matzner told media Monday. “And now it is a perfect opportunity to take it off the table.”

“There is an awful lot of anticipation and an awful lot of excitement in Washington about the visit,” he told Fife. “Obviously, they have a lot in common in terms of values and how they see the world. It’s really their shared values that are important, and particularly the focus on the environment. The President is serving his last year, and he is trying to focus on legacy issues.”