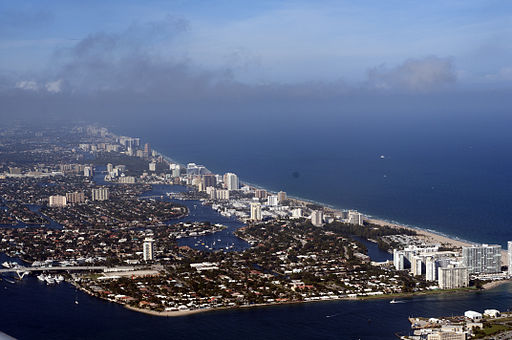 Fort Lauderdale, Florida’s grand plans to expand its population by one-third over the next 15 years are about to be undone by sea level rise, even as construction cranes, half-built high-rises, and massive numbers of building permits tell a story of a small town thinking big.

“As the coastal city’s skyline climbs upward, Fort Lauderdale—nicknamed the Venice of America for its 165 miles of canals—is slowly becoming an edifice of risk as climate change lays siege to its shores,” InsideClimate News reports. “Already, water regularly creeps over sea walls, lapping against foundations every few weeks. When the earth, moon, and sun align to drive waters as much as 18 inches above normal, the resulting King Tides inundate whole streets and neighbourhoods. The city is racing to put climate resiliency measures in place, but they face a nearly impossible foe.”

That’s why Mayor Jack Seiler was one of 15 municipal leaders from South Florida who wrote to state politicians and (both, at the time) Republican presidential nomination candidates Marco Rubio and Jeb Bush, asking them to promise action against climate change.

“Sea levels off the coast of South Florida rose about eight inches in the 20th century. As a result, we have seen more tidal flooding, more severe storm surges, and more saltwater intrusion into aquifers,” they wrote. “By 2050, mean sea level around Florida is expected to rise about a foot, a shift which could wipe out as much as $4 billion in taxable real estate in the four-county region of Southeast Florida. At three feet of sea level rise, the loss could total $31 billion, with large sections of the Everglades, the Florida Keys and the Miami metropolitan region underwater.”

Fort Lauderdale climate scientist Keren Bolter told InsideClimate there will be “winners and losers” in South Florida as a result of sea level rise. “But in a few decades, most waterfront properties in Fort Lauderdale will flood for days, weeks at a time.”