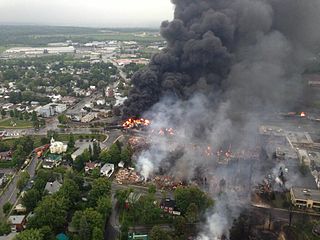 The U.S. Federal Railway Commission “has no overall understanding of the national risk environment” from the transport of hazardous goods in the United States, according to a Department of Transportation review.

USDOT initiated the audit of the Commission after a runaway train loaded with crude oil derailed and exploded in Lac-Mégantic, QC, killing 47 people and levelling the town centre. Its Inspector General’s report charges that the Railway Commission, which is responsible for overseeing hazardous goods movement by rail in the United States, routinely overrules its inspectors’ recommendations to pursue criminal charges for safety infractions, preferring instead modest civil penalties unlikely to be contested by rail operators.

The Inspector General’s report “estimated [that] 227 out of 1,126 violations may have warranted criminal referral,” AP reports. Of those, 17 involved “repeat or egregious offenses, falsifications, bodily harm, or environmental impact,” the report found.

In Canada, meanwhile, the National Energy Board reported that monthly shipments of oil by rail declined 39% in December compared to the same month a year earlier. The agency still warned that “if no major export pipelines are built and new oil sands production comes online as scheduled, Canada’s crude-by-rail shipments may shoot up dramatically,” Reuters reports.