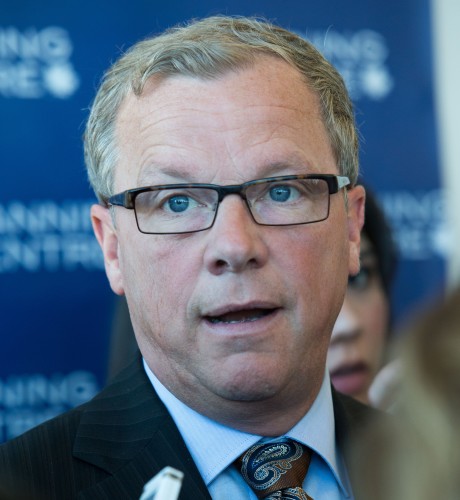 Saskatchewan Premier Brad Wall may be prepared to carry the fossil industry’s message to the First Ministers’ meeting in Vancouver this week, but it looks he still has some way to go to learn how to sing the industry’s tune.

Last Friday, Politico Morning Energy headlined its wrap-up of the annual CERAWeek conference in Houston with the observation that the “oil patch [is] going through ‘pure hell,’ but doesn’t look to D.C. for salvation.” While “a battered oil industry is spending its week in Houston commiserating over rock-bottom oil prices that have pushed companies over the brink and eliminated tens of thousands of jobs,” the industry “isn’t looking for much from the federal government, a point of pride for some,” ME reported.

“Look at the number of layoffs we’ve had in this industry,” American Petroleum Institute CEO Jack Gerard told energy specialist Elana Schor. “If that had happened in Detroit, think of the hue and cry in Washington.”

As ME points out, Gerard’s boast was a bit rich after Congress voted in December to lift the U.S. crude oil export ban. But the tone was still in marked contrast to Wall’s demand earlier this month for $156 million in federal funds to pay laid-off oilfield workers to clean up abandoned wells across his province. “Wall’s number crunchers say the investment would create about 1,200 jobs in the energy sector and help clean up about 1,000 abandoned wells,” the Regina Leader-Post reported at the time.

With all the talk of production field remediation in Alberta, you might have thought some mechanism would be in place for Saskatchewan fossil companies to clean up their own mess. Apparently, you would have been mistaken.

“In 2012, then-auditor Bonnie Lysyk criticized the way Wall’s government was cleaning up orphan wells, or wells where there is no legally responsible or financially able company to do a proper abandonment,” the Leader-Post recalled. “She estimated there were potentially 700 orphan wells in the province.” Wall’s government says more than 20,500 suspended wells across the province are waiting to be decommissioned and reclaimed.