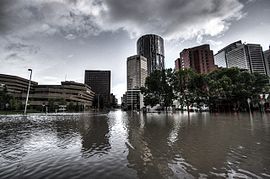 Disaster relief will cost Canada $902 million per year over the next five years, according to Parliamentary Budget Officer Jean-Denis Frechette, and CBC points to climate change as one of the driving factors.

“The warming in the Arctic has been associated with persistent weather systems in the mid-latitudes as well as extreme weather events,” Frechette noted in his report on the federal Disaster Financial Assistance Arrangements. “Consistent with this, multiple-day rain events have significantly increased in the Prairie provinces and in the Rockies. The recent record-setting multiple-day rainfalls in southeastern Saskatchewan in 2010 and 2014 are likely examples.”

“The disaster fund reimburses the provinces and individuals for expenses and damages resulting from disasters, be they natural or man-made,” CBC explains. “The high costs of flooding are partly due to the lack of flood insurance at reasonable cost for individuals in Canada, as well as problems with floodplain regulations on the Prairies, which account for most of the disaster costs over the last 10 years.”