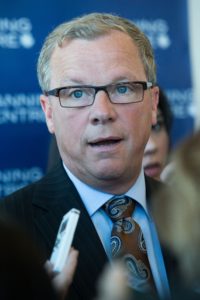 No one province will be able to stand in the way of Canada’s federal government implementing a national carbon price, legal scholars say.

Federal and provincial levels of government in Canada share constitutional jurisdiction over the environment, with the reserve power to act in the national interest residing in Ottawa. “If some provinces don’t act,” Sustainable Prosperity Chair Stewart Elgie told iPolitics, “Ottawa can just apply its own carbon price, and that’s not unusual.”

“We already see that in lots of areas of environmental law like toxic substances, clean air, endangered species, and other places where federal law lets Ottawa step in where provinces are not meeting minimum environmental standards,” Elgie added.

Last week, Saskatchewan Premier Brad Wall denounced a carbon price as a threat that would “kneecap” his province’s economy. “The last thing we need right now is a tax increase or a new federal carbon tax or, frankly, a provincial carbon levy,” Wall declared. “Now’s not the right time for any of those things.” Saskatchewan’s greenhouse gas emissions rose 72% between 1990 and 2012, the largest proportional increase of any province.

iPolitics suggests Wall’s views might change, however, in view of the $1 billion the federal government’s proposed $15/tonne carbon price would generate for Saskatchewan. Once-stiff oil industry resistance to a carbon price is also melting away.

Meanwhile, researchers in Quebec reported that nearly one in four Canadians surveyed either don’t believe global warming is occurring, or don’t believe it is caused by human activity. Resistance to the scientific consensus that both are true was highest in Alberta and, within the province, highest in its oil-producing northeast.

Nonetheless, the study suggests strong support—66% of those surveyed—for a national carbon cap and trade system, while 49% supported higher taxes on carbon-based fuels.