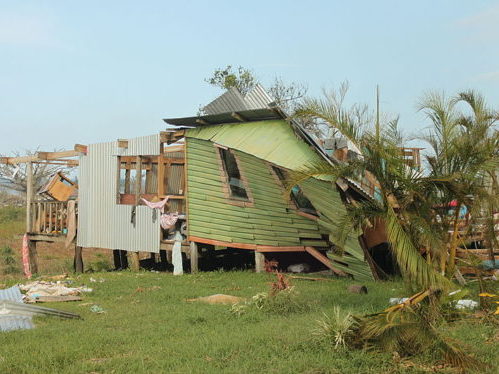 At least 20 people were killed, villages were flattened, and crops were shredded as Cyclone Winston slammed into Fiji with winds estimated at up to 285 kilometres per hour, prompting the government to declare a month long state of disaster.

“The damage has been widespread, homes have been destroyed, many low-lying areas have flooded, and many people have been left stunned and confused about what to do,” said Prime Minister Voreqe Bainimarama.

“As a nation, we are facing an ordeal of the most grievous kind,” he added on social media. “We must stick together as a people and look after each other.”

Government officials “were trying to establish communications and road access to the hardest-hit areas, and said they would not know the full extent of the damage and injuries until then,” The Weather Channel reported Sunday. Bainimarama said many people had been left without power, fresh water, or communications.

Al Jazeera reported concerns that “casualty numbers will increase once reports come in from outlying islands and from so-called ‘squatter areas,’ where shanty-standard housing was unlikely to have withstood the category 5 storm.” Alice Clements of UNICEF Pacific said Winston hit the capital of Suva “with destructive, howling winds, and the sound of rivets lifting from roofs a constant throughout the night.” But “it is likely that smaller villages across Fiji will have suffered the most, given their infrastructures would be too weak” to withstand the storm.

“We haven’t seen so much damage in any of the past cyclones, not in my lifetime,” local businessman Jay Dayal in the district of Ba told Reuters. “The three and a half hours of wind that we had, it just literally destroyed buildings. “Looking at all of the smaller houses and the squatter areas, they are almost flat.”

He added that “”I wouldn’t be surprised if people are now starting to go without food. It looks like a different country. It doesn’t look like Fiji.”

Before Winston hit Fiji, the Washington Post noted that the cyclone “took an incredibly unusual path to get to where it is right now—winding through the South Pacific and crossing over a single island twice. The cyclone passed Tonga’s island of Vava’u once earlier this week as a category 2, and then strengthened, turned, and passed over the same islands again as a category 4.”