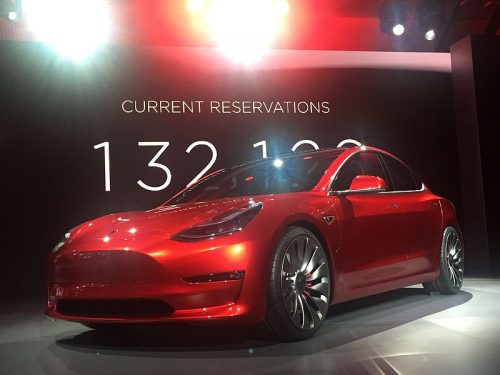 Tesla Motors will begin accepting orders for its mass-market Model 3 electric car next month, and founder Elon Musk is confirming a starting price of US$35,000—with incentives that could bring the total down as low as $25,000.

“The distinction Tesla is making here between the price before and after tax subsidies is crucial,” Bloomberg explains. “These tax incentives can knock off as much as $10,000 from the cost of purchase, drastically increasing the size of the market for the Model 3.”

The average new car in the U.S. costs $31,000, according to analysis by Bloomberg New Energy Finance, with SUVs and trucks accounting for most sales above that line. The conclusion is that “mass-market cars need mass-market prices,” Randall writes.

“A $25,000 Tesla would upend the U.S. auto market,” he adds. “Incentives vary widely state by state, but the base incentive is a $7,500 federal income tax credit available to everyone in the country. Bringing the $35,000 sticker price of the Model 3 down by that amount would expand the potential market by roughly 50%.”

But National Public Radio adds a note of caution to the story. “The Model 3 won’t go into production until 2017,” writes correspondent Camila Domonoske, and “if it’s delayed, the incentives that lower the price might not be available.” Tesla’s most recent new release, the high-end Model X, “was delayed for nearly two years, and since it was launched last fall, only a small fraction of the pre-ordered vehicles have been delivered.”