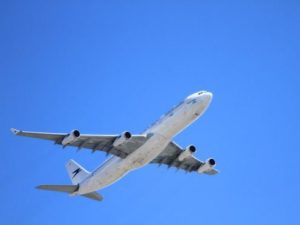 An expert panel of the International Civil Aviation Organization (ICAO) has adopted new rules to curb greenhouse gas emissions from commercial aircraft, but environmental organizations are still accusing the agency of “sandbagging” the commitments at the UN climate summit in Paris.

“The rules would apply new design and technology standards for newly-built commercial aircraft starting in 2020, and for aircraft designs currently in production by 2023,” The Hill reports, citing an ICAO statement. “By 2028, planes that don’t meet the new standards would have to be retired.”

The proposal must still be approved by ICAO’s full governing council.

“Every step taken in support of ICAO’s full basket of measures for environmental improvement is an important one,” said Council President Olumuyiwa Benard Aliu of Nigeria.

“It’s a big deal, a big step forward,” a White House official said, adding that the deal “demonstrates that the international community continues to take action on climate change through collaboration on standards to reduce carbon pollution.”

Center for Biological Diversity attorney Vera Pardee described the rules as “disturbingly weak” and urged the U.S. Environmental Protection Agency to go farther in its own domestic regulations.

“These standards set the bar embarrassingly low, ensuring that almost all aircraft will already meet the requirements well before they go into effect in 2023,” agreed Earthjustice attorney Sarah Burt. “The aviation industry is sandbagging, which seriously hinders our efforts to meet the commitments we made in Paris.”

A panel session at the UN summit pointed to the potential for aviation emissions to increase 100 to 200% over 2000 levels by 2050. “Mitigating all emissions in aviation in line with 2ºC requires demand management,” said panelist Alice Bows-Larkin of the Tyndall Centre for Climate Change Research. “If we don’t get text in Paris around aviation and shipping, the assumption is that they can continue” with business as usual, “and it isn’t a given that technology will mitigate their emissions.”

By the end of the summit, international aviation and shipping interests had succeeded in keeping their industries out of the Paris Agreement.