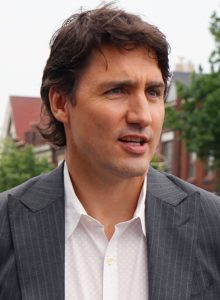 Justin Trudeau’s national energy program is taking shape, but it’s nothing like the “bold, controversial, and divisive” plan his father introduced when he was prime minister in the early 1980s, according to Toronto Star columnist Thomas Walkom.

The plan emerging now is built on the Canadian Energy Strategy adopted by provincial and territorial premiers last July. “Like the premiers, Trudeau is attempting to link two conflicting aims. The first is to support the beleaguered Western Canadian oil industry,” Walkom writes. “Hence the focus on pipelines.”

But “the second is the need to fight climate change. That’s a real imperative. If climate scientists are right, the world as we know it will not survive global warming,” and “the voters want government action.”

The premiers’ strategy “recognizes that any expansion of oil production must, somehow, take into effect climate change,” he notes. “Unfortunately, the premiers provided no formula for marrying these conflicting goals,” so that will fall to Trudeau.

Walkom lists three likely elements of the national plan: A new openness to foreign investment, including Chinese investment, in Canada’s oil and gas sector, support for pipelines, and an expectation that oil-producing provinces will contribute to meeting the country’s climate commitments. But “I’d be surprised if Trudeau makes the provinces do enough to meet Canada’s already inadequate greenhouse gas reduction targets.”

The column suggests a curious rationale for approving pipeline projects at a time when oil prices are crashing and clean energy investment is surging: “Pipelines, particularly pipelines that won’t be built for several years, can’t raise today’s price of oil,” but “they can convince companies that investing in Alberta and Saskatchewan for future production is still worthwhile.”