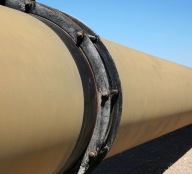 A TransCanada Corporation whistleblower who lost his job after identifying a safety threat in one of the company’s natural gas pipelines was finally vindicated last week—four years after he raised the alarm, and three years after “substandard materials” contributed to an explosion within a few hundred metres of a Cree family’s hunting cabin in northern Alberta.

“It was only an act of God that multiple members of the (Cree) family didn’t wind up in a barbecue,” said former TransCanada engineer Evan Vokes. Safety regulations require “that gas pipelines have fracture toughness. They have to have it and as soon as you have that…it stops little holes from becoming big holes.”

The National Energy Board’s safety order last week gives Canadian operators under federal jurisdiction 60 days to identify any pipelines that use fittings from Quebec manufacturer Ezeflow or Thailand-based Canadoil Asia. “Investigations by the [Transportation Safety Board], the NEB, as well as the pipeline operator, indicated substandard materials were present in the manufactured elbow where the failure initiated,” the Board said in an accompanying advisory. “Neither the manufacturer nor the pipeline operator physically verified the wall thickness of this specific fitting. The investigation determined that the wall thickness was less than that indicated” on the test report.

Despite the long delay in resolving the matter, NEB spokesperson Darin Barter insisted that “this isn’t anything that we sat on. These are complex matters and we’re taking action now.” He said the Board was being pro-active, but didn’t see an “imminent” safety threat.

The National Observer notes that Ezeflow has been featured in ads produced by the Canadian Association of Petroleum Producers to showcase jobs created in the tar sands/oil sands. The company said it disagrees with some aspects of the safety order. Vokes said the owners of the hunting cabin were lucky they weren’t in their cabin when the pipeline ruptured and exploded.