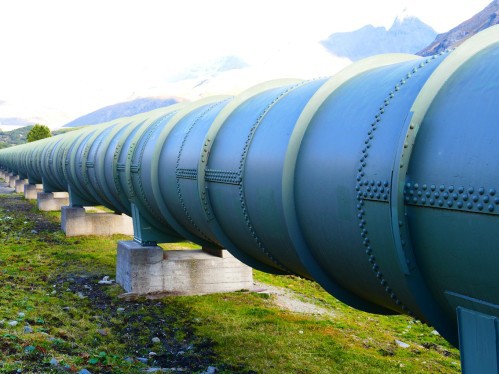 Kinder Morgan Inc. reported a US$1.15-billion loss this week for the fourth quarter of 2015, just as Canada’s National Energy Board convened local hearings in Burnaby, British Columbia that dug into the pitfalls of the company’s controversial Trans Mountain pipeline expansion proposal.

The company announced it would cut capital spending this year from $4.2 billion to $3.3 billion, on the assumption that benchmark West Texas Intermediate (WTI) crude oil would sell for US$38 per barrel. As The Energy Mix went to (virtual) press, WTI stood at $32.06 per barrel, and had recently been priced below $30.

In late October, Kinder Morgan saw its share price fall 4.7% as it failed to raise US$1.6 billion in new investment capital. “Investors panned the deal,” Reuters reported at the time, noting that the company’s shares had lost one-third of their value since the beginning of 2015.

At the Burnaby hearings, the National Energy Board (NEB) heard a wave of community opposition to a project that “would triple the capacity of an existing pipeline that carries 300,000 barrels of refined petroleum and crude oil from the tar sands in Alberta to refineries and marketing terminals in Vancouver and Washington,” the National Observer reports. “The project would involve 987 kilometres of brand new pipeline, 12 new pump stations, and 20 new tanks, ploughing through municipalities in Vancouver’s Lower Mainland and increasing tanker traffic in the coastal Burrard Inlet nearly seven-fold.”

On Friday, federal Green Party leader Elizabeth May said the project should “die here” before the local hearings conclude January 29. “The National Energy Board is completely unsuited and should never again be put in charge of environmental assessment,” she added.

During Canada’s recent federal election, Liberal Party candidates promised projects like Kinder Morgan would be subject to a “new, revised process,” but the NEB hearings are carrying on while that process is developed. In mid-November, Natural Resources Minister Jim Carr “indicated the National Energy Board review process will undergo a transition, but until that time project reviews will remain unchanged,” DeSmog Canada reported at the time.