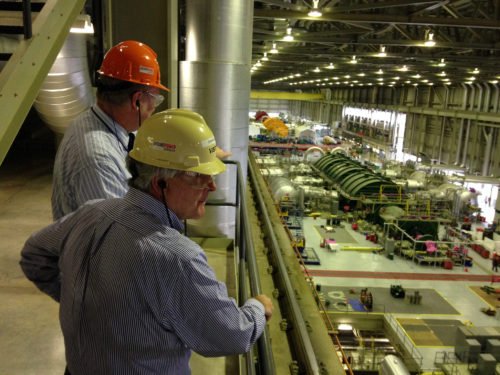 Ontario is pushing ahead with a C$12.8-billion reconstruction project at its Darlington nuclear station that will extend the plant’s operating life from 2020 to 2050.

To maintain the province’s electricity supply during the rebuild, Ontario Power Generation will continue operating the Pickering nuclear station through 2024. That decision “will save up to $600 million compared to running natural gas-fired plants or [relying on] imports to fill the gap,” the Toronto Star reports.

“The price is right and it is emissions-free,” said Energy Minister Bob Chiarelli, adding that the two projects will create 8,800 jobs per year over 10 years and extend 4,500 other jobs at Pickering.

For months, the Ontario Clean Air Alliance and Montreal-based Équiterre have argued that Ontario could import power from Quebec hydro plants for far less than the cost of refurbishing Darlington. This week, Chiarelli said that approach would require expensive transmission upgrades. “It’s not doable and it’s not feasible,” he told media.

Ontario Green Party leader Mike Schreiner called it “outrageously irresponsible” to “commit billions of your dollars to a project without a review of costs and alternatives,” adding that “no nuclear project in Ontario’s history has been delivered on time or on budget.”

At 7.2 to 8.1¢/kWh (before cost overruns), the projected cost of electricity from the refurbished Darlington plant will be 30 to 45% higher than average nuclear electricity costs of 5.6¢/kWh in 2014, the Clean Air Alliance noted in a release Monday.