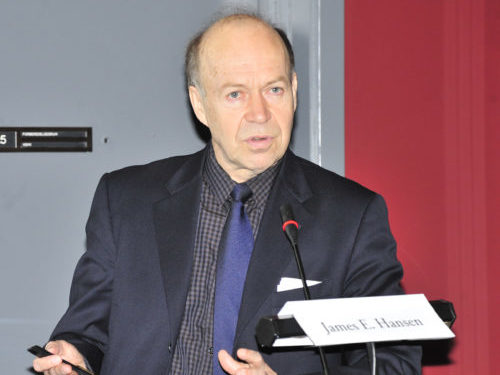 The agreement reached at the United Nations climate summit is “a fraud, really, a fake,” according to ex-NASA scientist James Hansen, the researcher who first brought a warning about the dangers of climate change to testimony before the United States Congress in 1988.

“It’s just bullshit for them to say: ‘We’ll have a 2°C warming target and then try to do a little better every five years,’” Hansen told The Guardian, just hours before the deal was finalized December 12. “It’s just worthless words. There is no action, just promises. As long as fossil fuels appear to be the cheapest fuels out there, they will continue to be burned.”

Hansen is one of many observers who see some form of global pricing—in his case, a carbon fee—as the only way to push emissions down quickly enough to avoid the worst effects of climate change.

“More than half of the cities of the world are at risk,” Hansen told Milman. “If you talk to glaciologists privately, they will tell you they are very concerned we are locking in much more significant sea level rises than the ice sheet models are telling us.”

He added that “the economic cost of a business as usual approach to emissions is incalculable. It will become questionable whether global governance will break down. You’re talking about hundreds of million of climate refugees from places such as Pakistan and China. We just can’t let that happen. Civilization was set up and developed with a stable, constant coastline.”

“Inside the narrow frame within which the talks have taken place, the draft agreement at the UN climate talks in Paris is a great success,” he notes. “Outside the frame, it looks like something else. I doubt any of the negotiators believe that there will be no more than 1.5°C of global warming as a result of these talks.”