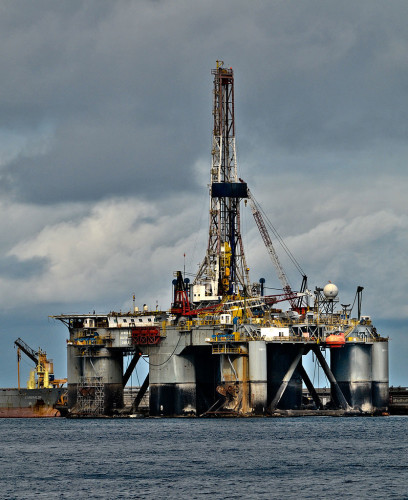 Oil and gas companies have been keeping a low profile at the Paris World Climate Summit, but their presence may be measured in how two sentences are written in the final agreement, Ben Adler reports in Grist. The passage highlights one of the deepest contradictions in the climate negotiations: countries signing on to reduce carbon emissions—while continuing to promote the production of the fossil fuels whose combustion creates those emissions.

One sentence contained in draft Paris accord language, Adler writes, “details how the countries should direct finance flows towards “low emission and climate resilient” economies and societies. The other calls on governments to reduce support for “high emission investments.”

The backdrop to the dispute is the fact that an estimated 80% of known fossil fuel reserves must remain in the ground if the world is to limit global warming to 2ºC/3.6ºF. The figure will be higher still if an accord adopts—as Canada and scores of other nations demand—the more precautionary figure of 1.5ºC/2.7ºF.

The extraction cap is clearly incompatible with continued corporate and state profits from coal, oil, and gas production. It’s also in conflict with the subsidies that many nations, again including Canada, provide to oil and gas companies—often, paradoxically, to support exploration for further reserves that will likely need to be locked in if climate goals are to be met.

Canada and other G20 nations made commitments as long ago as 2009 to phase out fossil fuel subsidies, which amount to US$452 billion per year (C$3.6 billion in Canada and US$2.5 billion in the United States), according to Oil Change International and the Overseas Development Institute. The finance section of the draft accord could mandate the end of such subsidies—or not.

A related issue is allowing subsidies or other incentives for the necessary transition of hundreds millions of energy consumers globally from high- to low-carbon providers.

China and India, seeking to retain the freedom to expand coal-fired electricity production in their energy-hungry economies, are opposing the phase out of fossil-fuel subsidies. Saudi Arabia is reported to be pushing for a final agreement to endorse the innocuous-sounding phrase “energy neutrality,” which could block any national policy effort to favour climate-compatible energy sources over fossil fuels.

The agreement, Adler concludes, appears likely to remain entirely silent on the principle of keeping most of the world’s ‘unburnable’ carbon safely underground. “The world’s largest, most ambitious climate agreement,” he writes, “will not include any provisions to limit the supply of the dirty fossil fuels that are driving global warming.”