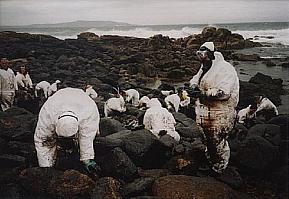 If there were a ‘Glass-Half Full’ Award being given out at the Paris World Climate Summit, it might go to Suncor chief executive Steve Williams. His product, diluted bitumen from the Alberta tar sands/oil sands, has been labeled the world’s dirtiest crude by U.S. President Obama, among others. Williams insists that view is “slightly outdated.”

“We are earning our way back onto the stage,” Williams told CBC News. Noting his province’s recently introduced climate measures that include a lifetime cap on tar sand/oil sands emissions. “If you look at what is actually happening in Alberta, we’re now leading the way.”

Problems with its key product haven’t gone away though. A new study by the U.S.  National Academics underscores the difference between dilbit and conventional crude when they spill.

“Dilbit is described as a mix of heavy bitumen with a peanut butter-like consistency which is then thinned with dilutents to make transportation easier,” Zahra Hirji reports in Inside Climate News. “It’s only after a few days post-oil spill when the dilutents evaporate that there’s a notable difference; a sticky tarry goo that unrecoverably sinks in the water.”