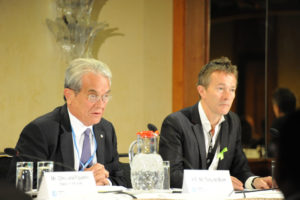 As make-or-break climate negotiations at the United Nations summit in Paris reached a critical point, a 100-member “high ambition coalition” revealed itself after six months of secret negotiations as a force for a robust, legally binding agreement.

“This group is not going to allow this thing to be diluted to the point that it’s a watered down agreement with really no teeth,” said Marshall Islands Foreign Minister Tony de Brum. “I think that’s important. And also that we will not leave anyone behind.”

The coalition includes the United States, all European Union states, and 79 African, Caribbean, and Pacific countries, but not India or China.

“This is an ambition coalition,” said Giza Gaspar Martins, chair of the 48-member Climate Vulnerable Forum. “This is also a coalition that is open to recognizing the difficulties of others, because alone, we can’t achieve the high mitigation ambition that we have.”

“These negotiations are not about them and us,” said EU Climate Commissioner Miguel Arias Cañete. “They are about all of us, developed and developing countries, finding common ground and solutions together. We urge other countries to join us. Together, we can do it.”

The coalition is emphasizing four key elements that will be essential to a successful agreement in Paris: The Guardian reports a list that includes a legally binding agreement, a clear long-term goal grounded in the latest climate science, a mechanism for reviewing countries’ emission reduction commitments every five years, and a unified system for tracking progress against those commitments.

Even if all countries fully implement their current carbon plans, the world would still be on a catastrophic track for at 2.7ºC average warming. Throughout the conference, that reality has driven calls for greater ambition and regular reviews. While India is refusing to consider reviewing its Intended Nationally Determined Contribution (INDC) before 2030, other developing countries have embraced the five-year review period.

Meanwhile, the French government representatives coordinating activities were expected to deliver a revised draft of the final agreement at 1 PM local time Wednesday, with many delegates holding their breath to see which elements of the deal would be retained, watered down, or eliminated completely.

On Tuesday, negotiators still had 600 to 800 segments of square-bracketed text to work through, each of them representing a negotiating position that had been neither adopted into the agreement nor rejected outright. Blogger Stephen Leahy reports the French presidency hopes to reduce that volume by up to 90%. All will have to be resolved or tabled by the end of the conference.

“Behind the scenes, the French presidency is conducting crucial ministerial talks—with each negotiating bloc in turn and in small groups—with the aim of producing a draft trade-off deal by Wednesday as the basis for the final spurt of diplomacy to crunch a final agreement by the Friday deadline.” The Guardian reports.

On Tuesday, as well, China, India, Brazil, and South Africa again pressed their claim that developed countries are nowhere near the $100 billion in climate finance they promised at the Copenhagen climate conference in 2009, challenging a controversial calculation method developed by the Organisation for Economic Co-operation and Development.

At mid-day, civil society groups held a large rally in front of a mini-replica of the Eiffel Tower, on the grounds of the Le Bourget conference site. The protest called on negotiators to adopt a safer 1.5ºC target, review existing INDCs before they take effect in 2020, and adopt regular five-year cycle for ratcheting up national commitments. Ministers from a half-dozen countries attended the rally to show their support.