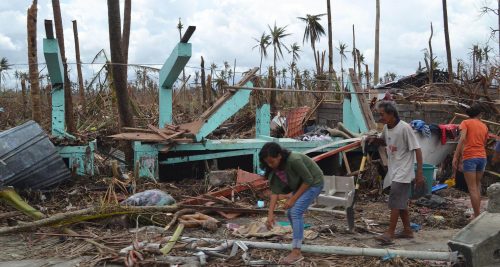 PARIS, 7 December, 2015 – More than half a million people have perished in 15,000 climate-related disasters since 1995, at a cost of $US2.97 trillion, according to new statistics released during the COP21 climate summit.

This is the second such tally of devastation and death accumulated since COP1, the first meeting two decades ago of world governments to confront the challenge of climate change.

That the latest Global Climate Risk Index, compiled by the organisation Germanwatch, differs from the UN’s own recent estimates over the same two decades is partly because compilers used different approaches and criteria, partly an indicator of the innate difficulties of linking sustained suffering and loss to discrete meteorological events, and partly because Germanwatch does not include all the statistics from slowly-emerging events such as drought.

But both sets of figures confirm that as global temperatures creep ever higher, as a consequence of greater concentrations of greenhouse gases in the atmosphere, in turn because of human activity, extreme events present ever greater hazards in the form of storms, hail, tornadoes, storm surges, floods, landslides, ice storms, wildfires and droughts.

In 2014, the worst three affected countries were Serbia – hit by catastrophic floods that swept through southeast Europe that year – Afghanistan and Bosnia-Herzegovina. The three worst affected countries over the two decades are Honduras, Myanmar and Haiti, with the Philippines in fourth place, just above Nicaragua and Bangladesh.

The Philippines, a vast archipelago of 7,000 large and small islands, is in the path of around 20 to 25 typhoons a year that increasingly hit communities that had once considered themselves relatively safe. The 190 nations attending COP21 have committed themselves to containing global warming to an average of 2°C above pre-industrial levels, but the Philippines is one of a large group that would prefer the world to aim for 1.5°C.

Tropical cyclones are linked to sea surface temperatures and could become more intense, more frequent or more extensive as temperatures rise, and tropical countries with vast coastlines are inevitably more likely to be in the path of the coming storms.

But the nations most at hazard have, under a UN umbrella programme, also been trying to anticipate the worst. And COP21 delegates heard that the Philippines government, for the first time, has started to keep tally not just of the statistics of catastrophe, but also of the disasters that did not happen.

“We consider ourselves already survivors of climate change, and survivors have stories to tell”

One case in point was Typhoon Koppu, the thirteenth tropical cyclone to hit the nation in 2015. Winds reached 240 km an hour, prodigious quantities of rain were dumped on the hills, and in one region more than 1,000 millimetres of rain fell in 24 hours. It triggered a huge flow of debris that buried three townships.

In 2012, during a similar storm, more than 1,000 people died. But although Typhoon Koppu in October dislodged 41 million cubic metres of rock, rubble and forest from the mountainsides, it killed nobody. Forewarned, the authorities had evacuated all three communities and saved 7,000 families.

So the climate risk index and other sources of information served not just as a league table of human suffering, but also as an indicator of levels of future risk  and a reminder that meteorological hazard now bears the fingerprint of climate change.

With good information, Mr Liboro said, countries could begin to cope, mitigate, adapt and survive. “Behind those numbers are actual lives,” he said. “We consider ourselves already survivors of climate change, and survivors have stories to tell.” – Climate News Network