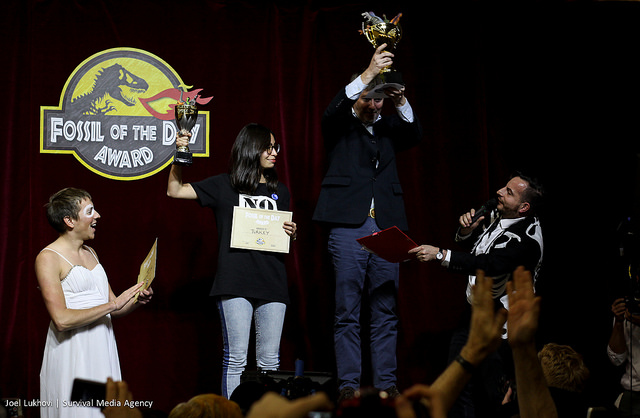 To the strains of an original sea shanty, written to the tune of What Can You Do With a Drunken Sailor?, the Master of Ceremonies donned a skeleton costume to read CAN’s indictment of two international agencies deemed to have done the most to obstruct an effective response to climate change.

But the IMO and ICAO “have the same emissions as Japan and Germany combined,” he told an animated audience of participants and media. “They’re currently exempt from being a part of the Paris Agreement, and they’re doing their best to keep it that way.”

Without action, marine and aviation emissions are on track to grow 270% by 2050 and “sink any chance of limiting a temperature rise to 1.5ºC. They also enjoy tax-free fuel subsidies to the tune of $60 billion, yet they don’t want to contribute any climate finance.”

Turkey took second prize in Wednesday’s Fossil of the Day competition for undertaking to build 18 new coal plants and double its emissions, while accepting international climate financing through 2030. “They want to get paid while rapidly increasing their emissions,” the emcee said. “That’s the equivalent of dealing drugs in rehab.”