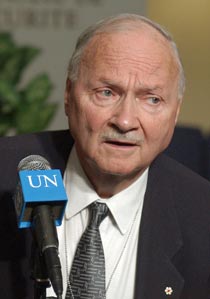 Former Canadian oil executive and diplomat Maurice Strong,  who is widely given credit for helping to launch the global environmental movement that culminated this week in the Paris World Climate Summit, died just days before its official opening.

Born in Manitoba, Strong made a personal fortune in the financing of oil development. When Canada created a national oil company in 1976, Strong was named to lead it. However, he became convinced that environmental destruction threatened humanity’s future, and he was a leading organizer of the 1992 Earth Summit in Rio de Janeiro. He had most recently been on the faculty of a university in Beijing. In a speech he had prepared for delivery to the United Nations General Assembly earlier this year, but was unable to present, Strong called on leaders planning to gather this week in Paris to “rise above the lesser concerns that pre-empt our attention and respond to the reality that the future of human life on Earth depends on what we do, or fail to do in this generation.”

UN Environment Program Executive Director Achim Steiner said in a statement, “Strong will forever be remembered for placing the environment on the international agenda.” The late diplomat remained controversial to the end however, becoming a lightning rod especially for critics of strong international and government action to protect natural security.