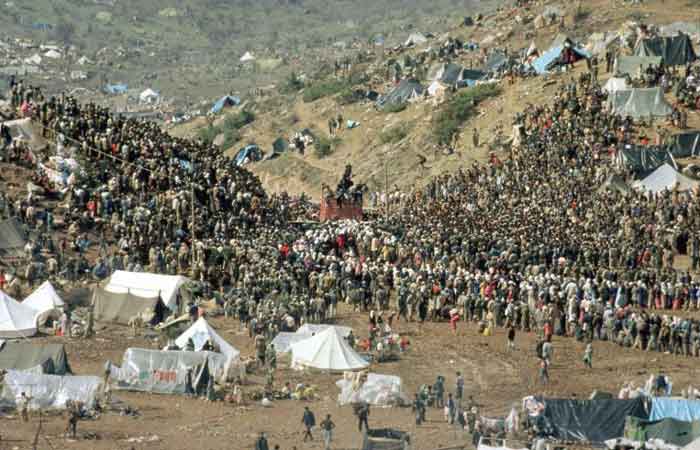 With the scars of a terror attack still fresh in the minds of Parisians hosting the World Climate Summit, a French defence ministry official has underlined the connection between natural security and national safety, The Canadian Press reports, equating the risk posed by climate disruption to that of terrorism and cyber sabotage.

Their remarks urge new momentum in response to a security threat identified as long ago as 2003, when a Pentagon advisor mused about the potentially catastrophic effects of “abrupt climate change.” Several reports since have focused attention on the current and imminent security impacts of even incremental climate disruption.

Last year, the U.S. Department of Defense warned in a report that “rising global temperatures, changing precipitation patterns, climbing sea levels, and more extreme weather events will intensify the challenges of global instability, hunger, poverty, and conflict. They will likely lead to food and water shortages, pandemic disease, disputes over refugees and resources, and destruction by natural disasters in regions across the globe.” Last month, the Washington, DC,-based Center for Climate and Security identified climate change effects as a critical irritant in America’s shifting relationship with China and the rest of Asia.
That warning has been taken up in recent weeks by leading political figures in the United States, where denial of climate change is strong.

“By fueling extreme weather events, undermining our military readiness, exacerbating conflicts around the world – climate change is a threat to the security of the United States and, indeed, to the security and stability of countries everywhere,” U.S. Secretary of State John Kerry told a Norfolk, VA, audience on Nov, 10. During a televised debate a week later, Sen. Bernie Sanders, a candidate for the Democratic presidential nomination, similarly identified climate change as his country’s greatest security threat.