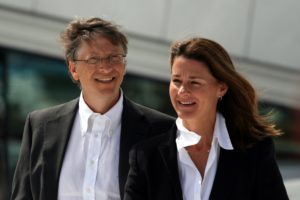 Billionaire philanthropists Melinda and Bill Gates are expected to announce the world’s biggest clean energy research and development partnership during the United Nations climate summit that opened this morning in Paris.

“I am doing it because I believe that the next half-decade will bring many breakthroughs that will help solve climate change,” Bill Gates wrote on his blog. “We need to be able to power all sectors of the economy with sources that do not emit any carbon dioxide.”

Details of the plan have yet to be released. “All that is currently known is that a group of developing and developed countries—including the USA and India—will double their clean energy research and development budgets, helped by funding from Gates and his fellow billionaires,” the National Observer reports. “While it’s unclear what direct impact the announcement could have on the climate negotiations, observers said it may help ease the concerns of developing countries about finance.”

Energy Innovation CEO Hal Harvey said clean energy research also deserves a boost in wealthier countries, noting that the dossier only receives $5 billion per year from the United States—as much as the country spends defending Middle Eastern oilfields. “It’s spectacular what public research and development has created in this country,” he said. “You cannot name a single technology that hasn’t had a huge boost.”