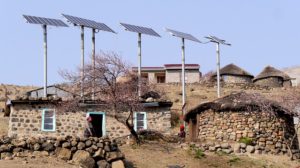 From Kenya to Equatorial Guinea to Tanzania, banks and energy developers are turning their attention to microgrids as an opportunity to bring power to 620 million Africans who have no access to electricity.

The surge in interest has been driven by the falling cost of renewable energy and has drawn in private and public institutions like Enel SpA, Italy’s largest utility, General Electric, and the African Development Bank.

“If you go back 130 years in Europe, electrification started with a minigrid,” Enel CEO Francesco Starace told Bloomberg. “There was a rich man, his house, his factory, and a small power plant. Eventually, his workers got hooked up, and then transmission lines were laid. Slowly, we got the system we have today. We don’t see any reason why Africa shouldn’t do the same.”

That matters, Bloomberg reports, because “Africa’s needs for power are immense,” with per capita consumption still “less than what’s needed to keep a 50-watt light bulb going continuously,” according to data from the International Energy Agency. “While these smaller electricity networks deliver only a trickle of electricity, they’re demonstrating a way to bring energy to the poorest areas without lifting pollution.”

Newly-affordable wind and solar now offer operators an alternative to diesel fuel, and microgrids “are cheaper and quicker to build than a traditional utility, with a coal plant at the middle and high-voltage power lines radiating out to customers.” By the same token, the continent needs energy supply systems that are larger than a single rooftop.

“A single-house solar panel system is great, but it just powers a light bulb or two,” said Sustainable Energy Fund for Africa Coordinator Joao Duarte Cunha. “A minigrid can power businesses and stimulate the local economy.”