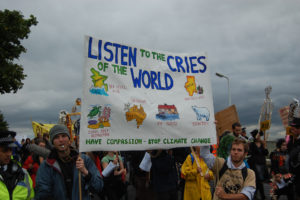 A faith-based coalition of Exxon shareholders is calling on the company to accept moral responsibility for global warming, after an InsideClimate News investigation revealed the company understood the risks of climate change as early as 1977.

“ExxonMobil claims that its energy production responds to a ‘moral imperative’ to meet growing energy demand and eradicate poverty, but this does not offset the necessity to mitigate climate change or the moral imperative to limit warming to 2°C,” states a resolution from the Tri-State Coalition for Responsible Investment, representing about three dozen Catholic organizations whose pension funds hold Exxon stock.

Meanwhile, for the second year in a row, the Province of St. Joseph of the Capuchin Order of friars is asking Exxon to appoint someone with climate change expertise to its board. “There is no doubt there is more interest in Exxon’s conduct than ever before,” said spokesperson Rev. Michael Crosby. “Exxon has dismissed calls to take responsible action on the climate for so long, and now maybe there will be a feeling that what we’ve been calling for was right all along.”

Environmental law professor Michael Gerrard of Columbia University said Exxon might have legal reasons to decline the Tri-State resolution. “It seems the resolution asks Exxon to admit certain things that Exxon may not want to admit,” he told ICN. “I could imagine any admission of this sort playing into some of the new theories of liability being considered,” including a potential prosecution under racketeering laws.