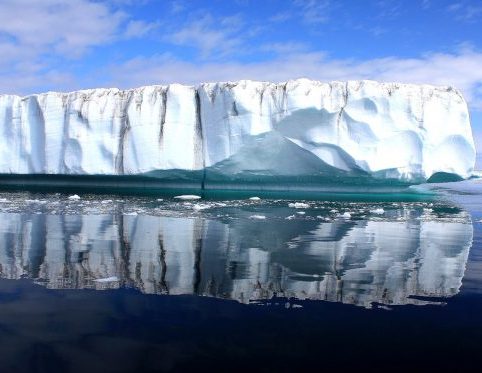 Warm ocean waters eating away at the base of marine glaciers have opened a second “floodgate” of Greenland ice into the ocean, according to a paper published yesterday in the journal Science.

“After eight years of decay of its ice shelf, Zachariæ Isstrøm, a major glacier of northeast Greenland that holds a 0.5-meter sea-level rise equivalent, entered a phase of accelerated retreat in fall 2012,” writes a research team led by Jeremie Mouginot of the University of California-Irvine in the published abstract.

“The acceleration rate of its ice velocity tripled, melting of its residual ice shelf and thinning of its grounded portion doubled, and calving is now occurring at its grounding line. Warmer air and ocean temperatures have caused the glacier to detach from a stabilizing sill and retreat rapidly along a downward-sloping, marine-based bed.”

“If you see Greenland as a boat, it’s like we’re taking water from every side now,” Mouginot said.

“The entire ice sheet of Greenland contains enough ice to raise sea levels some 20 feet,” the Washington Post explains. “It has been losing ice rapidly in recent years, through a combination of meltwater runoff on the ice sheet’s surface—which reaches the sea through complex channels and fissures—and the calving of large icebergs from its glaciers.”

According to NASA estimates, the Greenland ice sheet “is losing several hundred billion tons (or gigatons) per year and raising sea levels by three quarters of a millimetre annually,” Mooney writes. “If so, that would be a little under a third of the total global sea level rise.”