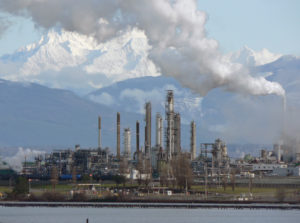 Canada’s biggest contribution to the global fight against climate change would be to make the Alberta tar sands/oil sands the focus of its carbon reduction plan, a Climate Action Network Canada (CAN-C) panel told a national media briefing Monday, ahead of the United Nations climate summit in Paris.

“The smartest thing the federal government can do is to work with Alberta to phase out, to manage that transition in the oil sands sector,” said Executive Director Louise Comeau. “Because oil sands production is so expensive at the margins, it would be one of the first sources of energy to come out of the system. It’s just too expensive and dirty, and it’s prudent for Canadians to accept that there will be no growth in oil sands production.”

She added that continued expansion of the tar sands/oil sands would add 2.3 to 4.0 million barrels of oil per day to Canada’s production and 41 megatonnes per year to its greenhouse gas emissions. “That’s clearly incompatible with climate protection.”

Panelists stressed that 1.5ºC, not the current international target of 2.0, must be the stabilization goal for average global warming. “If we get to a 2ºC world, then forget the Marshall Islands. Forget large parts of Bangladesh. Forget parts of the U.S. and Canada coastline,” said Équiterre co-founder Steven Guilbeault. But “we’re surpassing 1ºC increasing temperatures over pre-industrial level,” he warned. “We’re there now. Our window of opportunity is smaller and smaller.”

Dale Marshall, National Energy Program Manager at Environmental Defence, called on the Trudeau government to adopt 2050 as its target year to completely decarbonize the economy. In the meantime, he pointed to two fossil infrastructure projects in Canada that should be put on hold until the country can overhaul its environmental assessment rules. “They need to stop the Kinder Morgan and Energy East processes and spend some time strengthening that regulatory approval process, then restart it on those pipelines.”

Speaking from Paris Monday, Environment and Climate Change Minister Catherine McKenna pledged the two pipeline proposals would be subject to more stringent regulations that are “based on science” and make room for public participation, the Globe and Mail reported. “We need to build trust,” she said.

The CAN-C panel pointed to “loss and damage”—the compensation that should be available to vulnerable countries for severe climate impacts that are unpredictable and unavoidable—as a sticking point in international negotiations. “Small island nations—getting inundated by rising sea levels and super typhoons—want rich countries to pay for the climate-related disasters,” the National Observer reports. “Canada, the U.S, and Australia are pushing back,” concerned that an agreement on loss and damage could be interpreted as accepting liability for climate impacts.

Prystupa cites McKenna’s weekend statement that “the Government of Canada is determined to deliver real results on climate change and the environment. We will work with our international partners on the adoption of an effective climate change agreement and in the transformation towards a low-carbon, climate resilient global economy.” Last week, ex-Pembina Institute executive director Marlo Raynolds was appointed as McKenna’s chief of staff.