Two U.S. Senators Unveil Keep It In The Ground Act 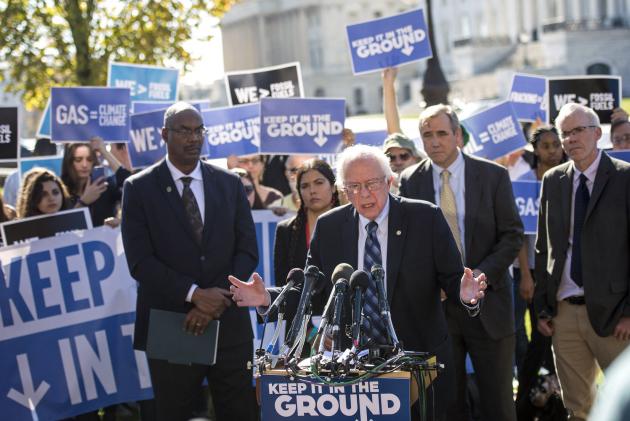 Senators Jeff Merkley (D-OR) and Bernie Sanders (I-VT) have released the Keep It In The Ground Act, a measure that would prevent future fossil fuel leases on public land in the United States.

“Merkley is under no illusions that the bill will become law any time soon, or even come to a vote in a body controlled by Republicans,” reports Vox climate specialist David Roberts. But he “hopes the introduction of the bill will spur conversations among legislators, in the U.S. and in other countries, and among the grassroots movement that did so much to put supply-side [climate change] policy on the agenda. And he hopes the question might play a bigger role in the presidential election, where thus far climate change has been all but invisible.”

“Up here on Capitol Hill, too many votes are locked up by the Koch brothers,” Merkley told Roberts. “They really have a firm grip on the U.S. Senate.”

“Oil, coal, and gas taken from federally-owned lands and waters are responsible for more than 20% of the country’s total greenhouse gas emissions,” writes Katie Valentine on the Climate Progress blog, citing research by the Center for American Progress and the Wilderness Society. “According to one Bureau of Land Management report, 279 million acres of federal lands in the U.S. contain an estimated total of 31 billion barrels of oil and 231 trillion cubic feet of natural gas.”

On the other side of the aisle, Valentine reported last week that Republican Senators Kelly Ayotte (NH), Lamar Alexander (TN), Mark Kirk (IL), and Lindsey Graham (SC) had formed an energy and environment working group to “focus on ways we can protect our environment and climate while also bolstering clean energy innovation that helps drive job creation,” according to a release from Ayotte’s office.

The working group “will be a way for us to bring people together and start an ongoing conversation about these topics—like how we can best protect our environment and climate, pursue common sense and market-based reforms to grow our economy, and promote cleaner energy production,” Ayotte said.