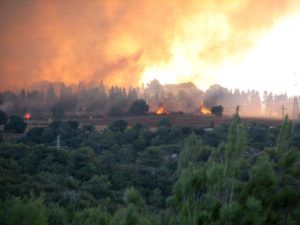 British author and activist George Monbiot is issuing an urgent call to action on the mounting “eco-apocalypse” in Indonesia, describing the country’s wildfires as “almost certainly the greatest environmental disaster of the 21st century—so far.”

The extensive peat and forest fires span the 5,000-kilometre length of the country, are releasing more carbon dioxide than the U.S. economy, and have produced more emissions in three weeks than Germany generates in a year.

“A great tract of earth is on fire. It looks as you might imagine hell to be,” Monbiot writes. “The air has turned ochre: visibility in some cities has been reduced to 30 metres. Children are being prepared for evacuation in warships; already some have choked to death. Species are going up in smoke at an untold rate.”

He adds that “this catastrophe cannot be measured only in parts per million. The fires are destroying treasures as precious and irreplaceable as the archaeological remains being levelled by ISIS. Orangutans, clouded leopards, sun bears, gibbons, the Sumatran rhinoceros and Sumatran tiger, these are among the threatened species being driven from much of their range by the flames. But there are thousands, perhaps millions, more.”

Monbiot says he’s always wondered how traditional media would cover an ecological disaster of this magnitude, noting that he “pictured the news programs producing brief, sensational reports, while failing to explain why it was happening or how it might be stopped. Then they would ask their financial correspondents how the disaster affected share prices, before turning to the sport.”

Today’s news cycle is living up to Monbiot’s low expectations.

“It’s talking about the dress the Duchess of Cambridge wore to the James Bond premiere, Donald Trump’s idiocy du jour, and who got eliminated from the Halloween episode of Dancing with the Stars. The great debate of the week, dominating the news across much of the world? Sausages: are they really so bad for your health?”