‘Remarkable’ Progress on GHGs, But Still More Work Ahead: Figueres 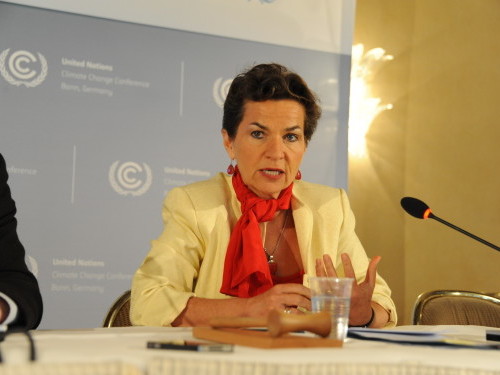 A UN report stressed that countries are poised to make a “significant dent” in emissions without sacrificing economic growth, CBC reported. That change will herald a “major economic transformation,” including massive shifts to renewable energy and energy efficiency, combined with better land management, urban planning, and transportation.

“It is a very good step, it is actually a remarkable step, but it is not enough,” Figueres told reporters Friday, pointing to an International Energy Agency estimate that countries’ climate commitments to date would hold average global warming at 2.7ºC, compared to the present trajectory of 4º to 5º. The IEA estimate was based on Intended Nationally Determined Contributions (INDCs) submitted by 146 countries, representing 86% of global emissions.

The “unprecedented” collective effort to reduce GHGs represents “a clear and determined down payment on a new era of climate ambition from the global community of nations,” Figueres said in a release. Governments have signalled “that they are determined to play their part according to their national circumstances and capabilities.”

“Many countries have been healthily conservative in what they have put on the table, and that’s very understandable because they do not want to expose themselves prematurely internationally,” she added during her media event. “We may get more from some corners and less from others,” but countries will also have to leave Paris with “a path of continuous improvement” toward the UN’s official target of 2ºC.

There is also growing momentum for a 1.5º “buffer zone” to avert the worst impacts of climate change.

While national commitments to date fall far short of what’s needed, “it’s very likely that China, for example, can and will move faster than it’s offered, as it’s already rapidly getting out of coal and into renewables,” said Greenpeace climate specialist Li Shuo.