Pipeline Capacity Could Run Out by 2017 Due to Citizen Opposition 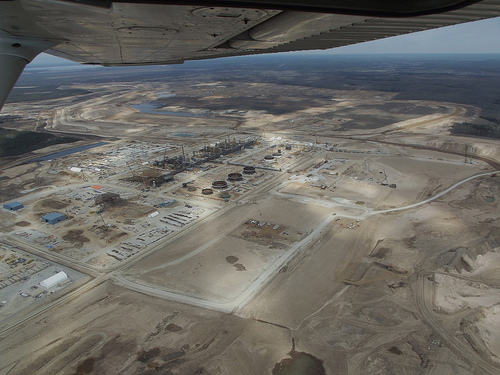 Citizen opposition and falling oil prices have brought Canada’s tar sands/oil sands industry to a point where export capacity is due to run out between 2017 and 2019, meaning that “oil industry expansion plans are no longer inevitable,” according to a blockbuster report last week by Oil Change International.

“Tar sands producers have run out of room to grow,” concludes Lockdown: The End of Growth in the Tar Sands. “And public efforts to slow and stop tar sands expansion by challenging expansion of the North American tar sands pipeline system will continue to have a meaningful impact on keeping carbon in the ground.”

The system of pipelines that carries tar sands/oil sands product to market is currently 89% full, Oil Change reports. “Without new pipelines and expansions, the tar sands will run out of pipeline capacity as soon as 2017, when tar sands production is projected to hit 2.5 mbpd [million barrels per day],” the report states. Without new pipelines, “significant amounts (some 34.6 billion metric tons) of carbon will stay in the ground,” the report concludes. “This would mean a better chance to maintain a safer climate future.”

While crashing oil prices have hit the viability of many tar sands/oil sands projects, the report points to citizen action as a decisive factor. “The steep decline in prices has driven companies to slash spending, cut jobs, and shelve projects,” Oil Change acknowledges. “But many projects would have remained commercially viable with lower prices if sufficient pipeline capacity were available. For those projects, it is the market access constraints that have tipped projects into being unviable.”

Industry projections still call for tar sands/oil sands production to grow from 2.1 mbpd today to up to 5.8 mbpd by 2035, notes Carol Linnitt of DeSmog Canada. But those numbers “rely on high prices, public licence, and a growing pipeline infrastructure—all of which are currently endangered in a carbon-constrained world.”

Linnitt quotes lead author Hannah McKinnon’s comment that tar sands/oil sands pipelines represent a “high-risk, high-carbon, high-cost path” that is at odds with “diversifying the Canadian economy and building a cleaner, safer energy future.” The oil industry is making “desperate efforts” to “prove they are still in the game,” she told DeSmog. “But thanks in large part to inspiring, people-powered movements, they’re not getting away with it anymore.”

“Whether it is exposing Exxon’s efforts to bury climate science for decades, calling out governments for basing energy policy on demand scenarios that take us towards five degrees or more of warming, or exposing the industry for meddling and undermining climate and clean energy policy the world over,” McKinnon said, “people power is killing fossil fuel fatalism.” (h/t to The Energy Mix subscriber Shelley Kath for first pointing us to this story)