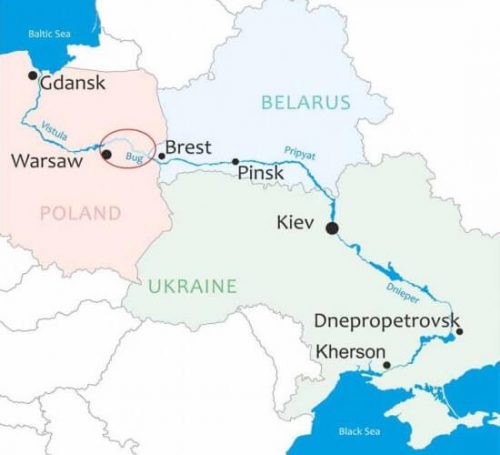 Project to link the Baltic to the Black Sea via a 2,000km trans-Europe waterway risks disturbing radioactive debris from the 1986 nuclear disaster.

MINSK, 31 October, 2015 – Plans to link a chain of rivers and canals in Poland, Belarus and Ukraine may release radioactivity from the remains emitted by the Chernobyl nuclear power station disaster of 1986, environmental experts say.

The project, which would complete a huge trans-Europe waterway, is designed to increase trade between the three north European states, and to foster tourism and encourage more environmentally-friendly freight transport.

Small river vessels, but not sea-going ships, already traverse the existing section of the waterway between the Ukrainian capital, Kiev, and Brest, a city in south-western Belarus on the border with Poland.

This route takes them through the Chernobyl exclusion zone designed to keep people out of one of the world’s most radioactively contaminated areas. It was imposed after the 1986 explosion at the nuclear power plant.

Andrei Rehesh, secretary of the Commission on the Development of the E40 Waterway, the European Commission’s name for the trans-Europe link, told journalists visiting the canal near Brest of the regular trips made through the zone by the river craft. These take them within an estimated 500 metres of the Chernobyl plant itself.

The commission was set up to investigate the economic, technical and environmental aspects of the waterway proposal. It is due to report its recommendation to the European Commission in November.

The waterway is largely complete within Ukraine and Belarus, but the section from Brest to Warsaw needs work to excavate a canal deep enough to take larger vessels. If this work is approved, authorising the digging of a canal of up to 200 kms long, the scheme’s backers hope to see its present annual freight traffic grow from around 1 million tonnes to 4 million.

“The radionuclides from the Chernobyl explosion have become concentrated in the sediments on the beds of nearby rivers, including the Dnieper, which provides Kiev with drinking water. Quadrupling the amount of freight could increase the risk of releasing the radioactivity contained within these sediments.

“Especially if sections of the route are dredged as part of the expansion project to allow the passage of sea-going vessels, that will cause significant disturbance. There’s a clear need for research into the possible implications.”

There is already a link between the Baltic and the Black Sea, using the rivers Main and Danube, but it is about 1,000 km longer than the route through Poland, Belarus and Ukraine.

If that route is approved, that will involve digging a new stretch joining Brest to Warsaw − a distance of around 200 km − to allow freight to move freely. The existing link between the two cities is big enough only for leisure craft.

One of the selling points of the scheme, its backers say, is that it will provide a more environmentally-friendly way of moving freight in north-east Europe. They say the carbon dioxide emissions per tonne/kilometre of water-borne freight are 1.5 times less than rail, and five times less than road.

At a time of heightened tension over relations between Ukraine and Russia, the scheme will make it easier for Ukrainian grain to reach markets in western Europe.

But Dr Denisov thinks this will pose no problem. “I don’t think the Russians will care very much about this”, he says.

“The link will run through Belarus, which is friendly to Russia, and although it will enable Kiev to send its exports to western Europe more easily, it is only one of many links between the two.”

With the commission’s report due to be submitted in November, a political decision on whether to go ahead could come as early as next year, though analysts expect it is likely to come later. − Climate News Network