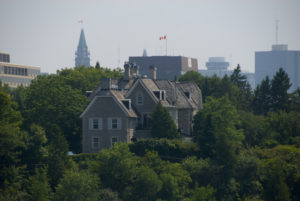 The Sierra Club Canada Foundation (SCCF) has come up with what it calls an “audacious plan” for 24 Sussex Drive, the Prime Minister’s official residence: when the decision is made to renovate the building, it should be done as a net-zero heritage retrofit.

24 Sussex was built in the 1860s, and it’s at least 40 years overdue for major repairs. Earlier this week, CBC reported that Prime Minister-Designate Justin Trudeau and his family would move into Rideau Cottage, on the grounds of the Governor General’s residence, “until further notice.”

“The report found the windows, plumbing, electrical systems, heating, and air conditioning at 24 Sussex Drive are all in poor to critical condition,” CBC reported. “The home also has no fire sprinklers and contains asbestos, which has been linked to disease, including lung cancer.”

But “any chance at a solution was lost when the home’s previous occupants learned they would have to vacate the premises for 12 to 15 months while the work was done,” Beckett writes. “The prime minister’s office responded in 2008 that the boss ‘had no intention of moving out of the official residence until his term was up.’”

Since then, solar electricity costs have plummeted, and “low-carbon analysts now argue that every building on earth must be net-zero—meaning that they produce at least as much energy as they consume—by 2050 or sooner.” And it could turn out that a net-zero project costs Canadian taxpayers less than a standard retrofit.

“It may be that the improvements in energy efficiency would not only pay back handsomely, but actually reduce capital costs,” one of Canada’s leading low-carbon architects, Greg Allen, told Sierra. “Depending, of course, on how elaborate the HVAC system would be.”

While 24 Sussex isn’t at the top of Trudeau’s climate and energy agenda, “symbols matter, and if they get it right, this symbol will matter a lot,” Beckett writes. “Think of the lasting, iconic impact of a heritage retrofit done right, a building that has great meaning in Canada’s history and could become an emblem for the country’s low-carbon future.”

And “imagine the PM showing up at a make-or-break United Nations climate summit in Paris with firm greenhouse gas reduction targets to announce (we’re still working on that), and the promise that he will soon be ready to host his international peers in the world’s most energy-smart official residence.”